In pictures: Easter traditions in Romania 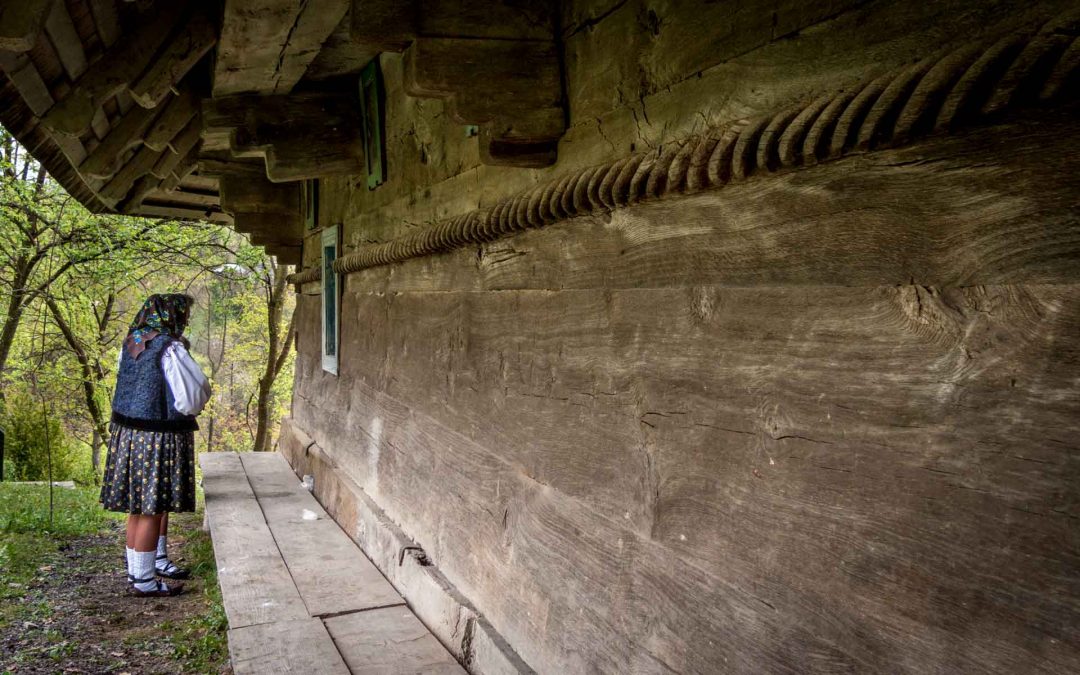 Easter in Romania has an important religious significance for the people, but it is also an occasion for them to display their well-kept customs and traditions. The holiday is honored with a number of intriguing events, fast-paced preparations and cheerful celebrations which are wonderful to witness and photograph!

Every year we organize a photo tour around the celebration and we would like to share with you some of the best pictures of the Easter holidays in Romania we managed to take during our tours.

Most Romanians are Orthodox, but there is also a significant minority of Catholics, reason for which both celebrations are important in the country. You might know that the two Easters usually fall on different dates, despite the fact that all Christians recognize Easter on the first Sunday after the first full moon of spring. 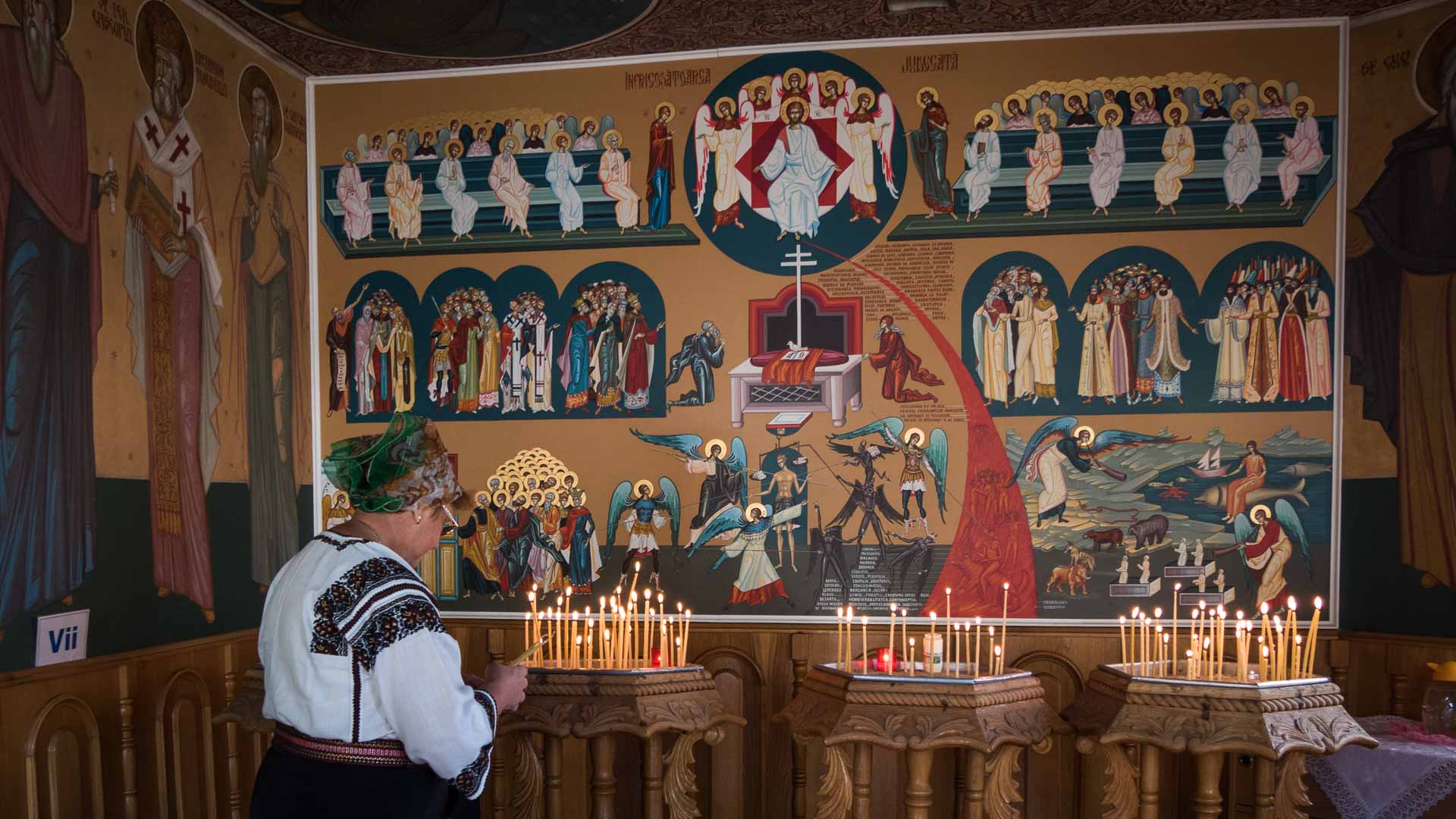 The difference comes from the fact that the Catholics take into account the Gregorian Calendar when calculating the Easter date, while the Orthodox people look at the Julian Calendar.

In 2020 the Orthodox Easter and the Catholic Easter are only one week apart. Unfortunately, this year due to the pandemic and the restrictions imposed by the governement, all events are cancelled.

The shooting of the rooster

It is an event of Hungarian origins that takes place in Apata on the first day of the Catholic Easter, right after the mass. People dressed in traditions costumes gather in the center of the village and walk together until they reach a nearby hill. 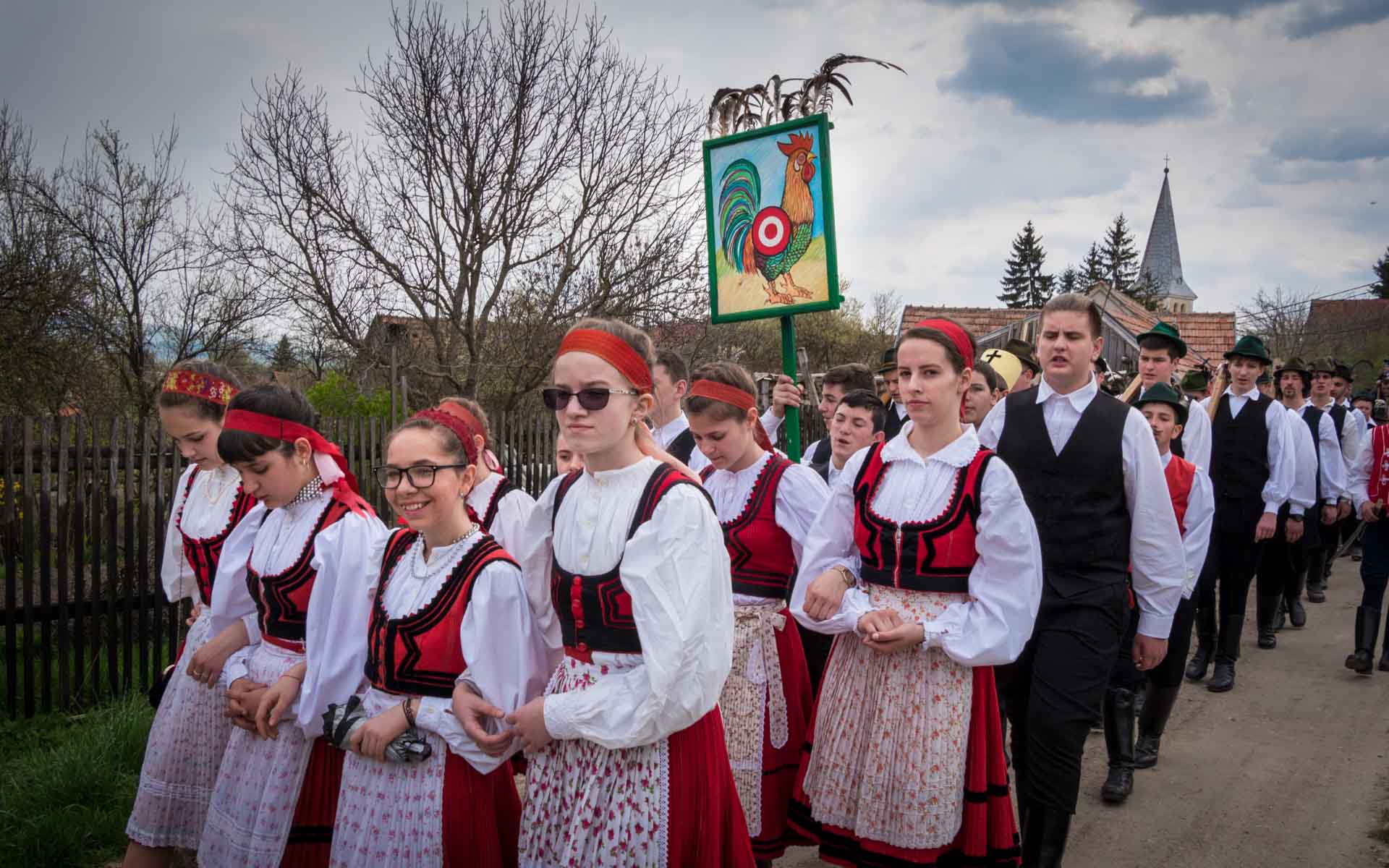 There the youngsters take turns shooting the rooster drawn on a wooden target. The custom is described as a revenge against the rooster that, centuries ago, while the invading Tartars were about to leave the village after seeing it abandoned, came back after hearing the cry of a rooster. 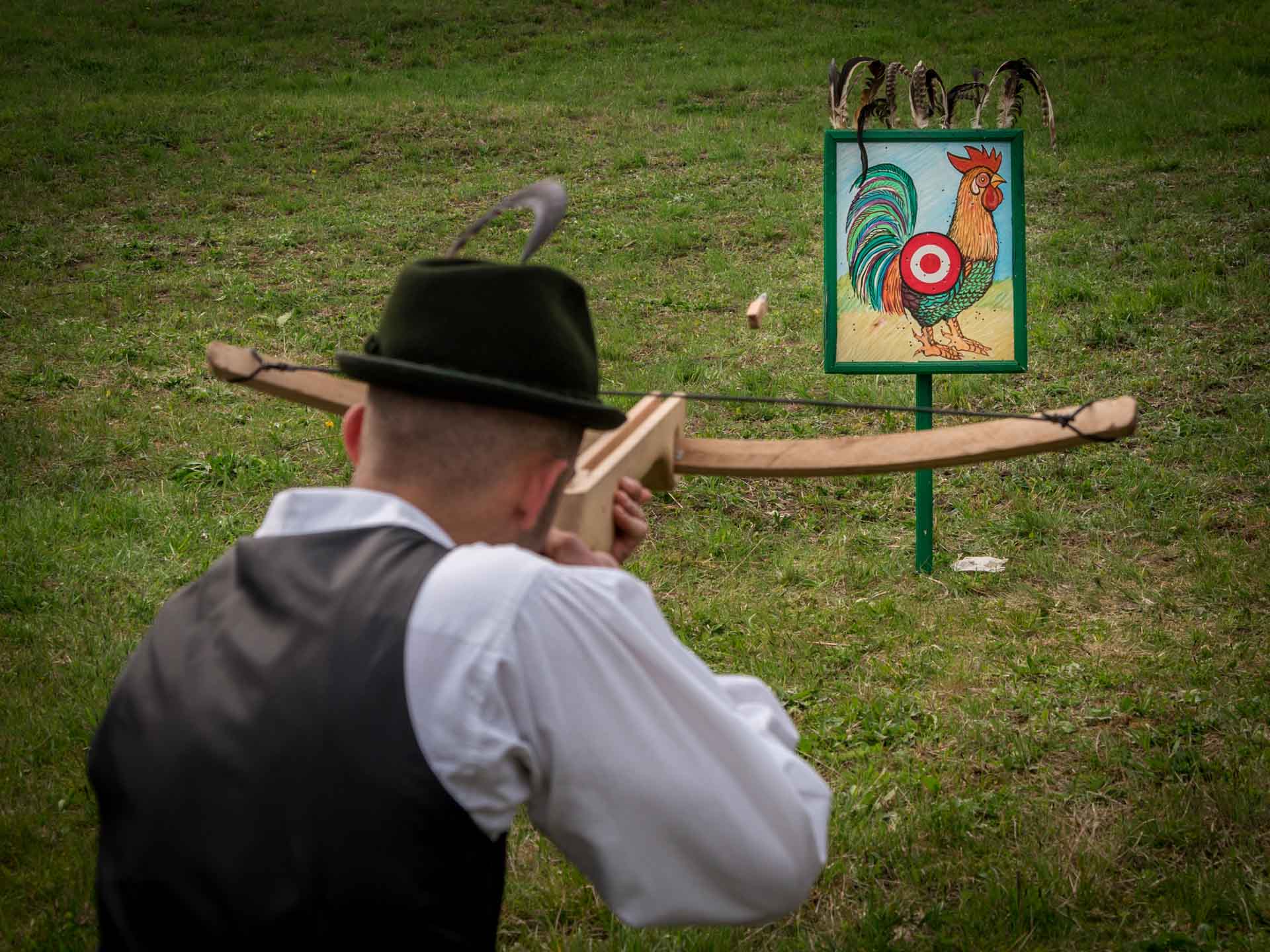 Easter is a two-day event, but especially in rural areas people are engaged in the preparations for Easter throughout the entire week leading to the celebration. 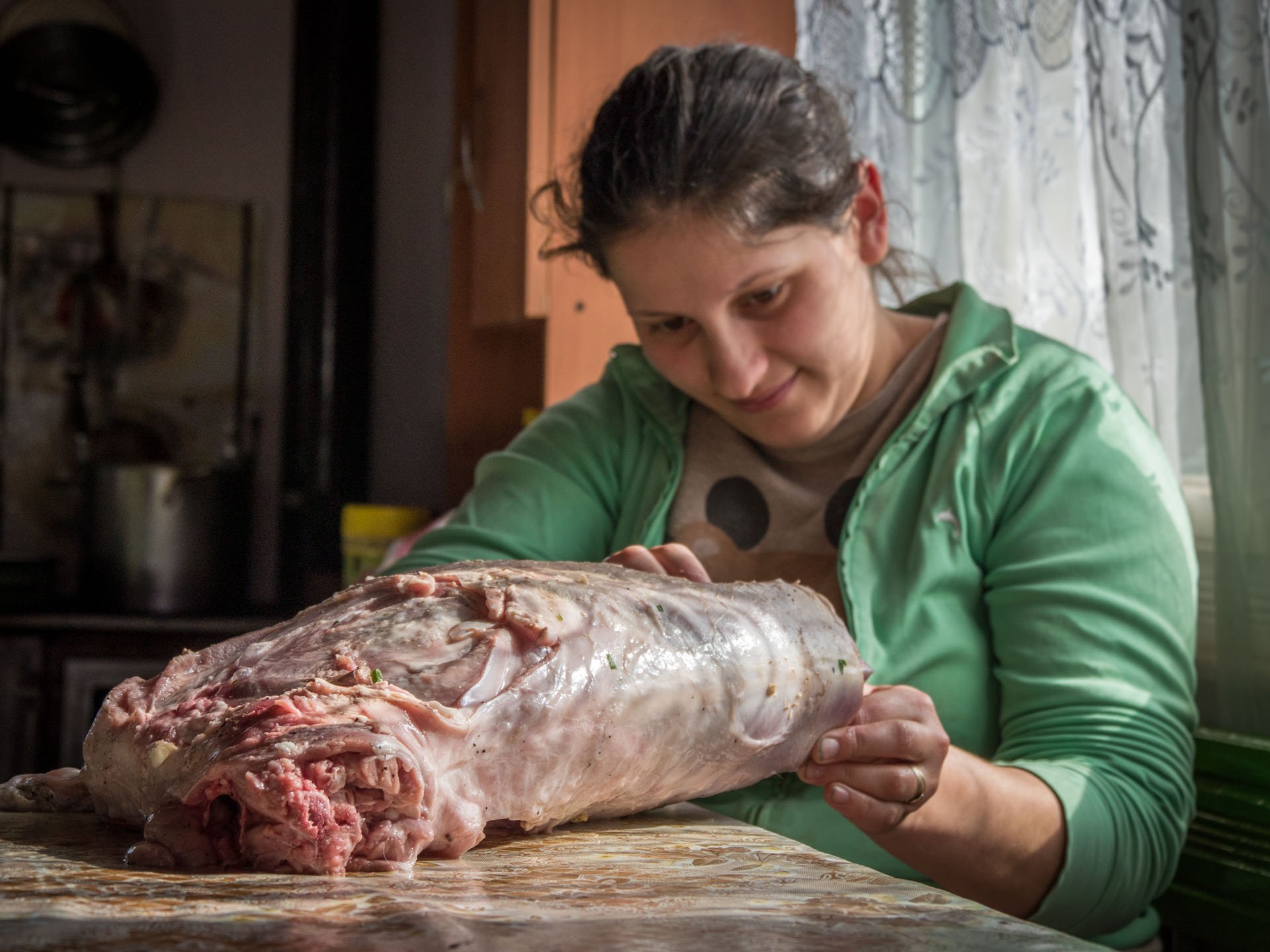 You will be able to photograph women cooking and men slaughtering the lamb, which is later used for preparing the Easter meal. 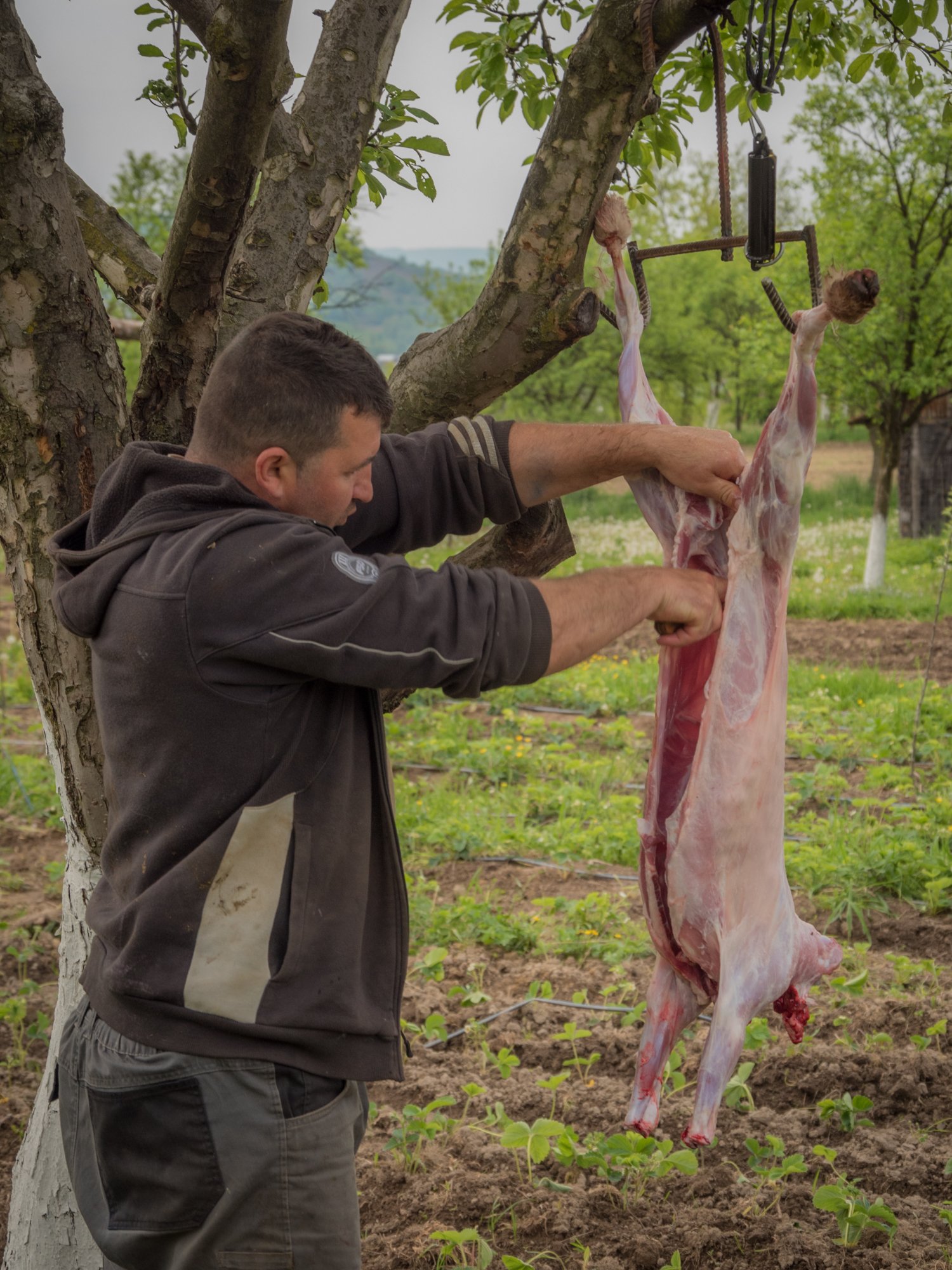 The main subject of most photos of Easter in Romania are the painted eggs. While painting eggs is common all around the country, in Bucovina region it became an art. 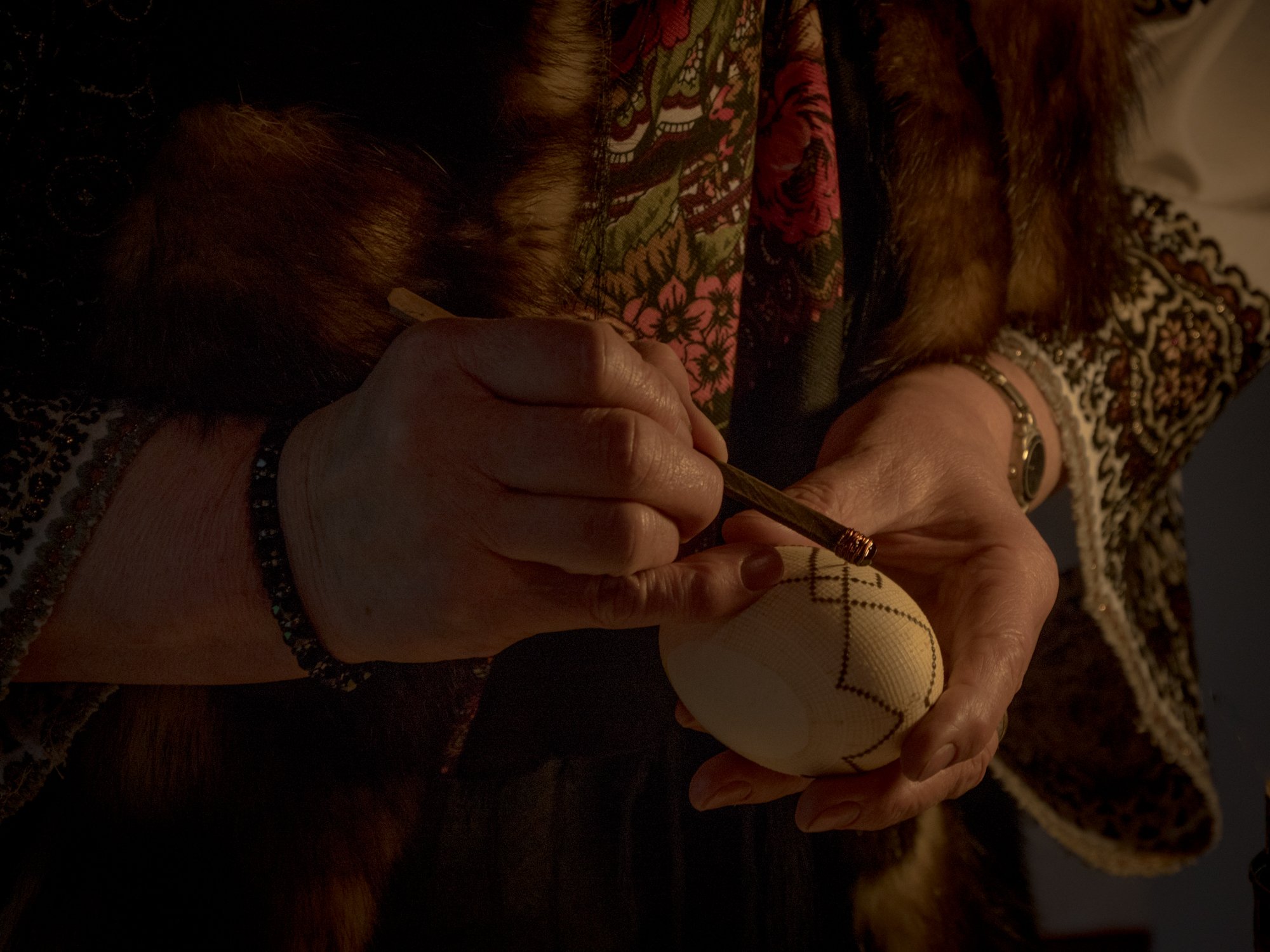 There are experienced egg decorators who do the intricate work of painting very detailed motifs and ornaments. 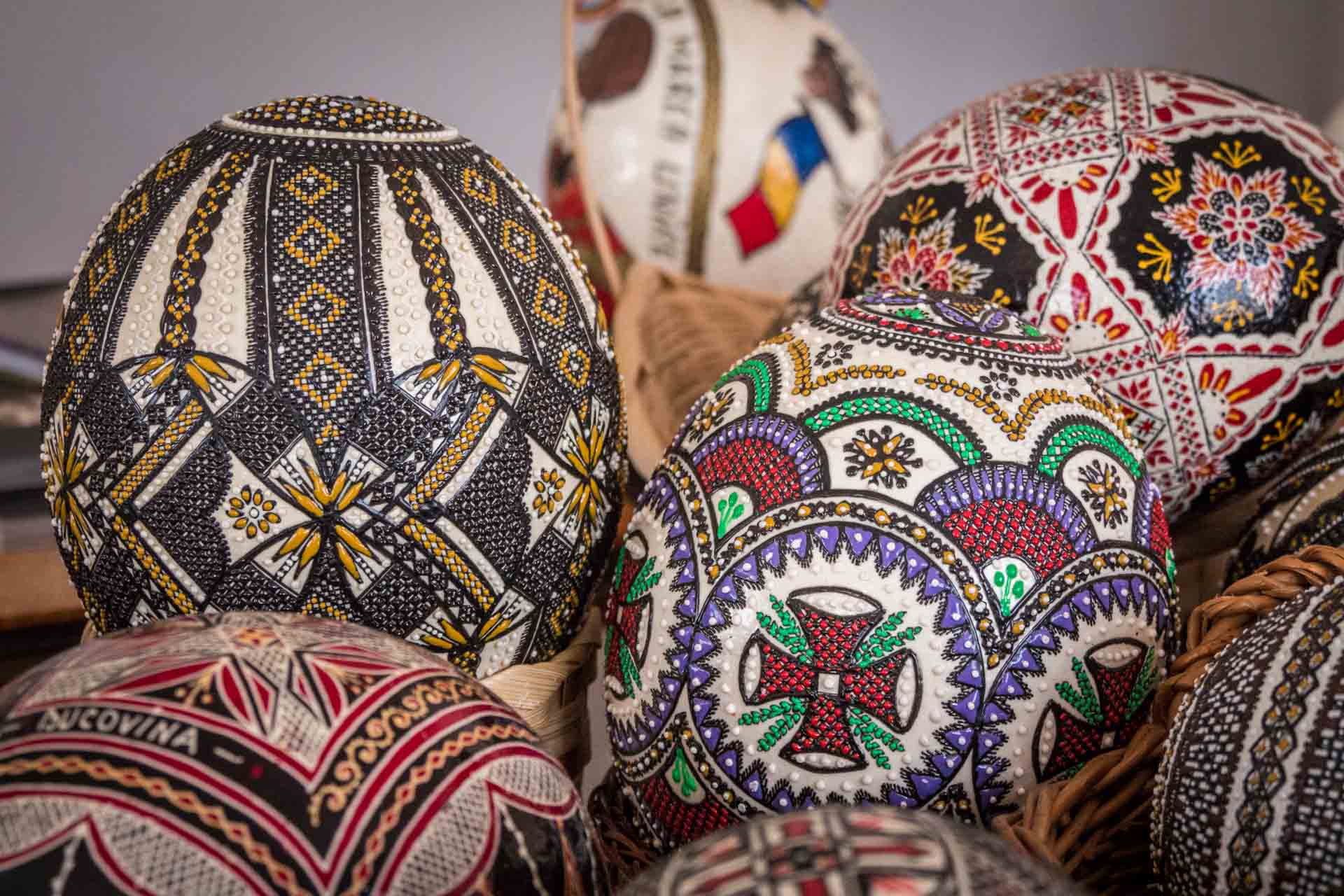 They use a brush or wax, as well as leaves or herbs to obtain beautiful natural imprints. 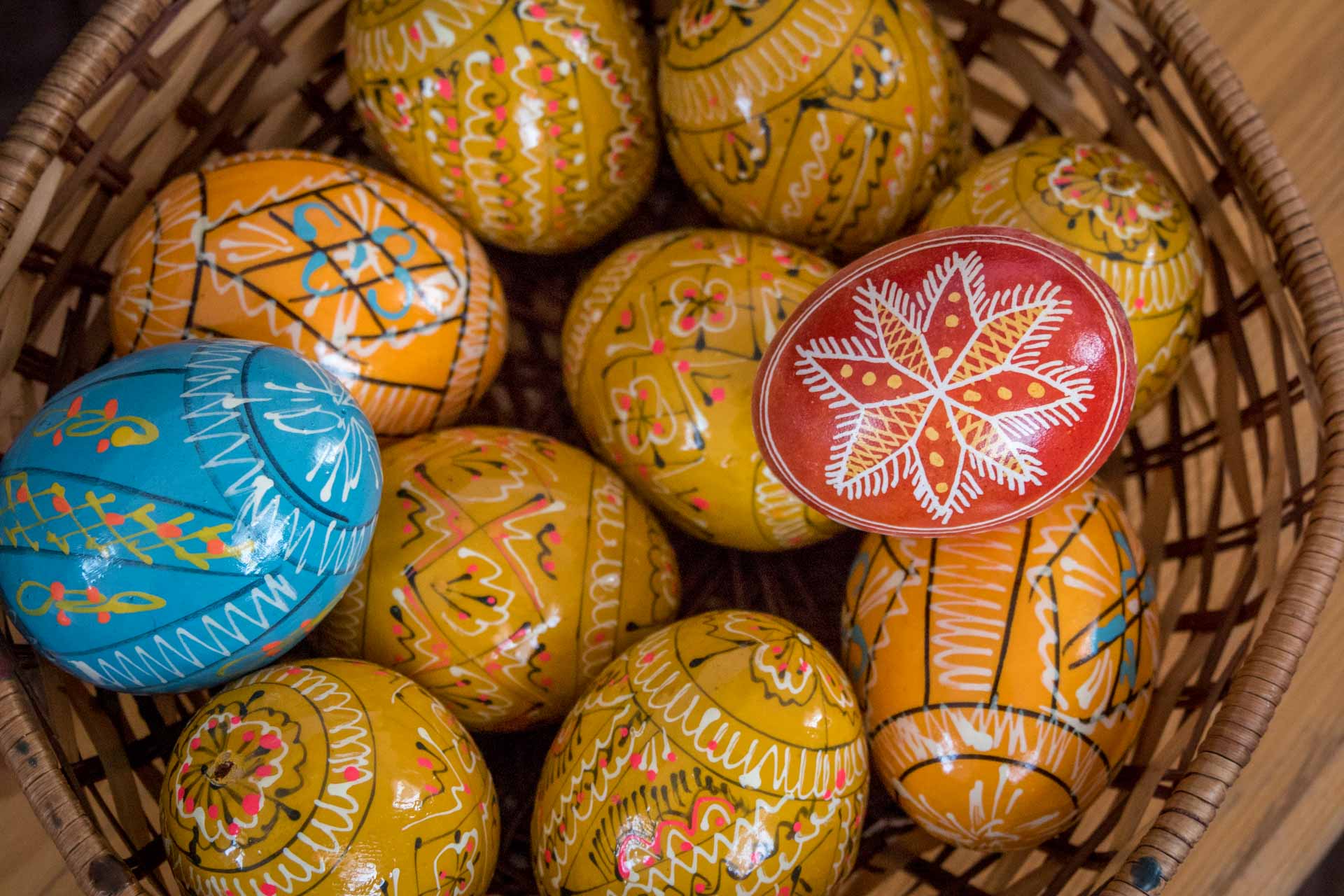 The religious proceeding that takes place on Saturday night is a beautiful event, enveloped by an atmosphere of peace and spirituality. 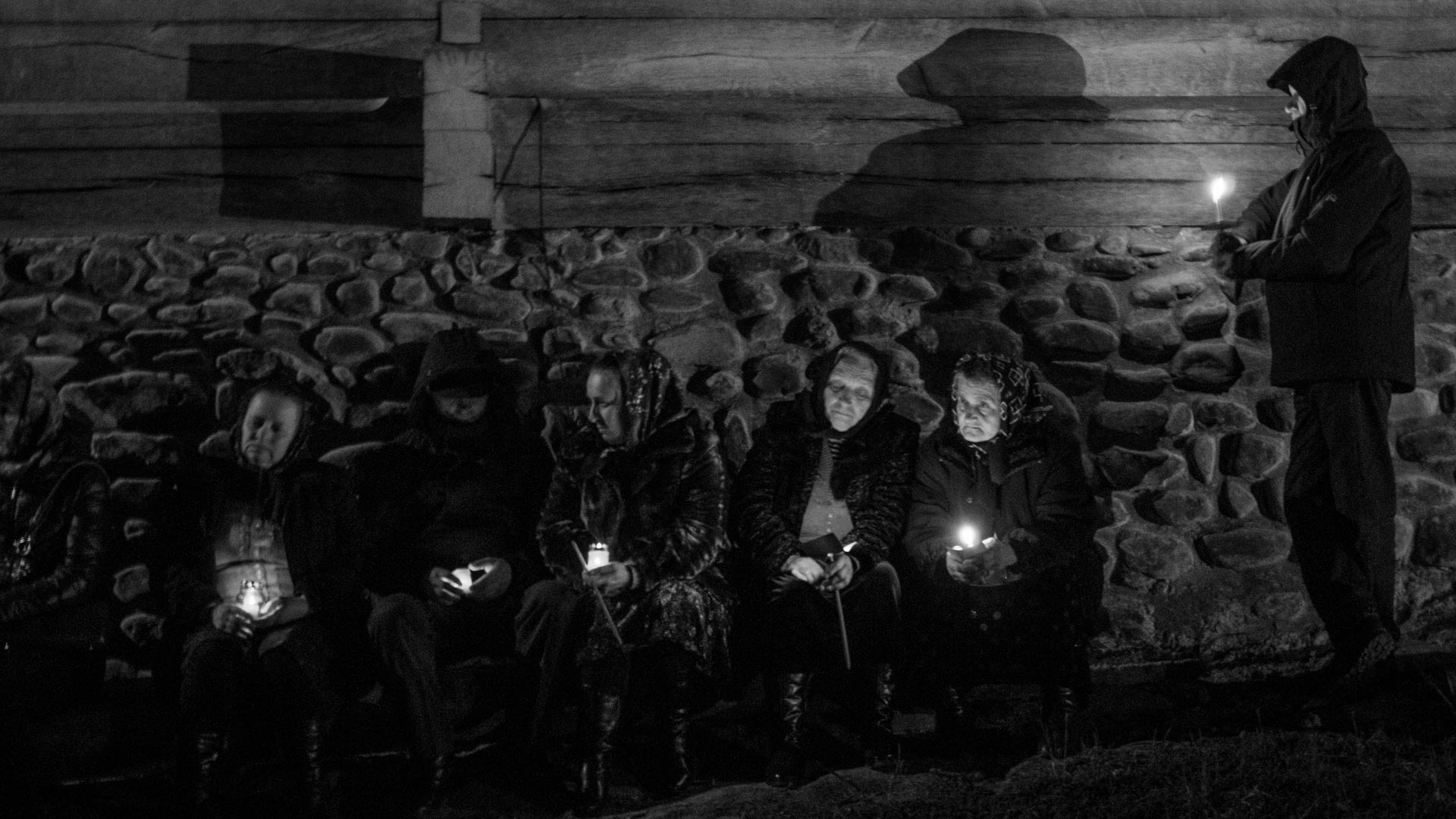 The highlight is the moment when People get “the light” and while holding the lighted candles, surround the church for three times. 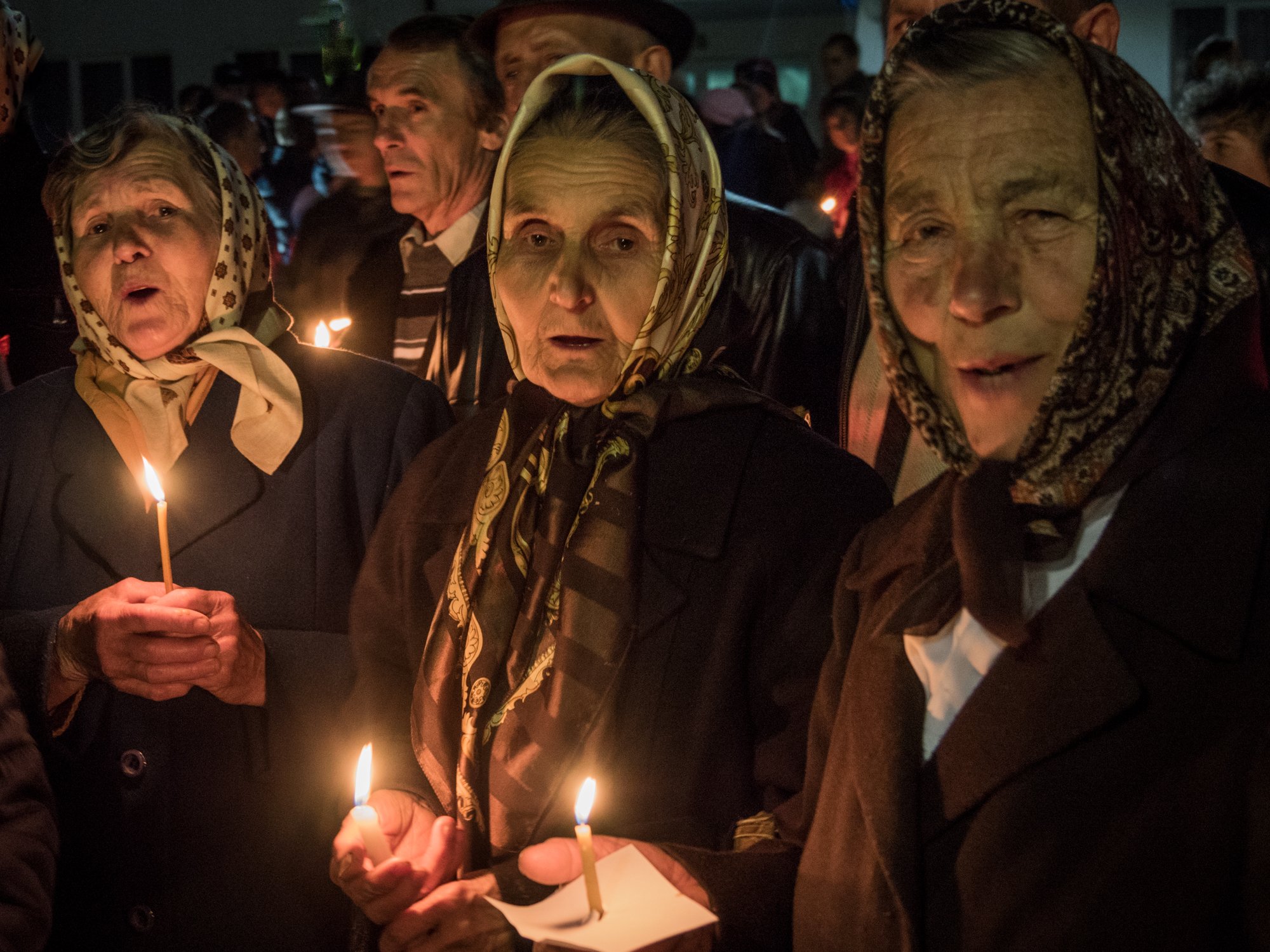 Our pictures of the Easter holidays illustrating the church service were taken at a wooden monastery in Maramures. We spend that Easter together with guests from US and Canada and the founder of AutehnTrip. 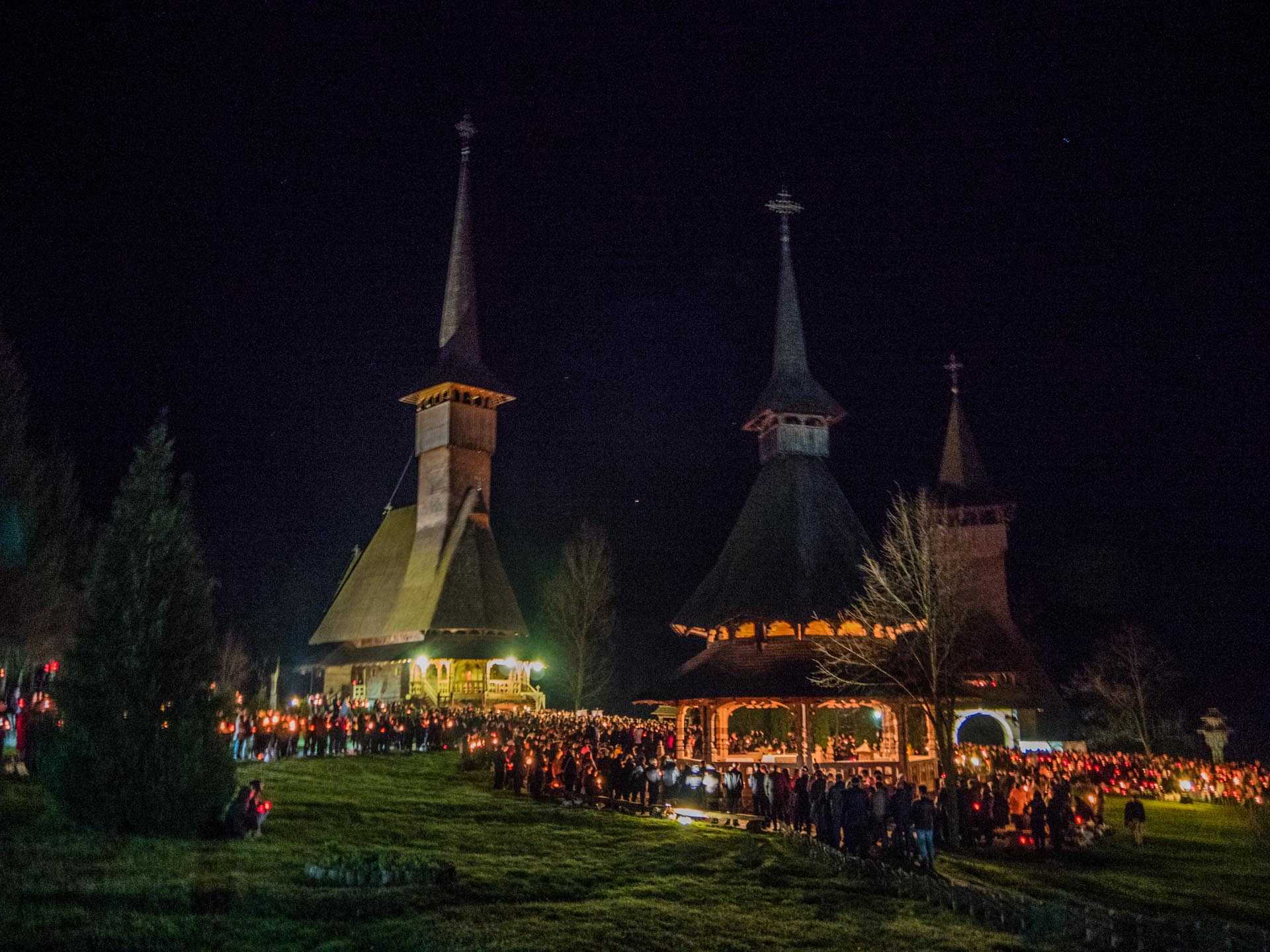 On Sunday morning, baskets are taken to church to be blessed. 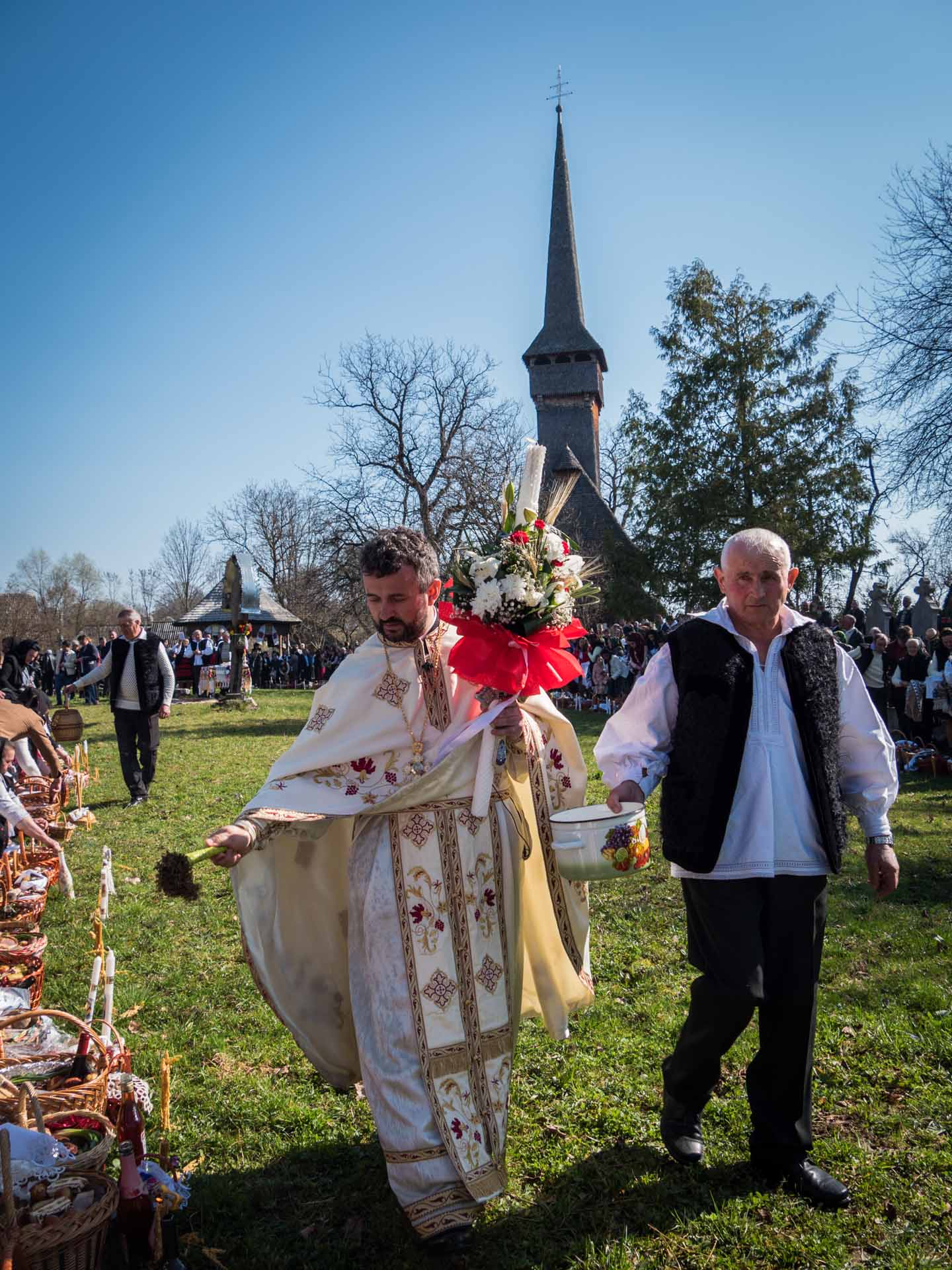 Then, they’re given to children and taken back home, thus setting the end of the Lent fasting period. Here we are at the wooden church from Desesti in Maramures, UNESCO World Heritage site. 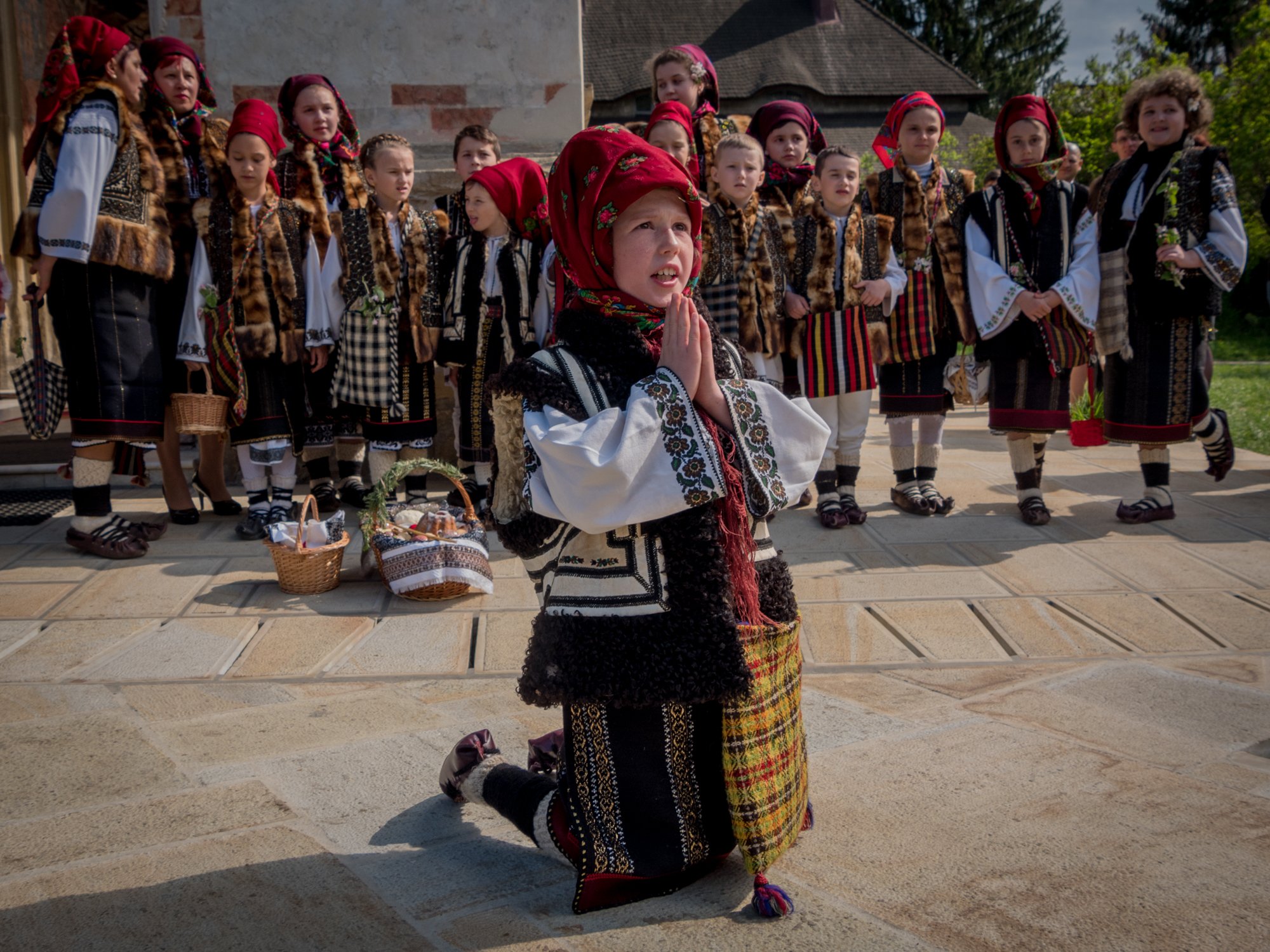 After having their food blessed during the Sunday Mass, villagers come home to finally enjoy the traditional Easter meal. 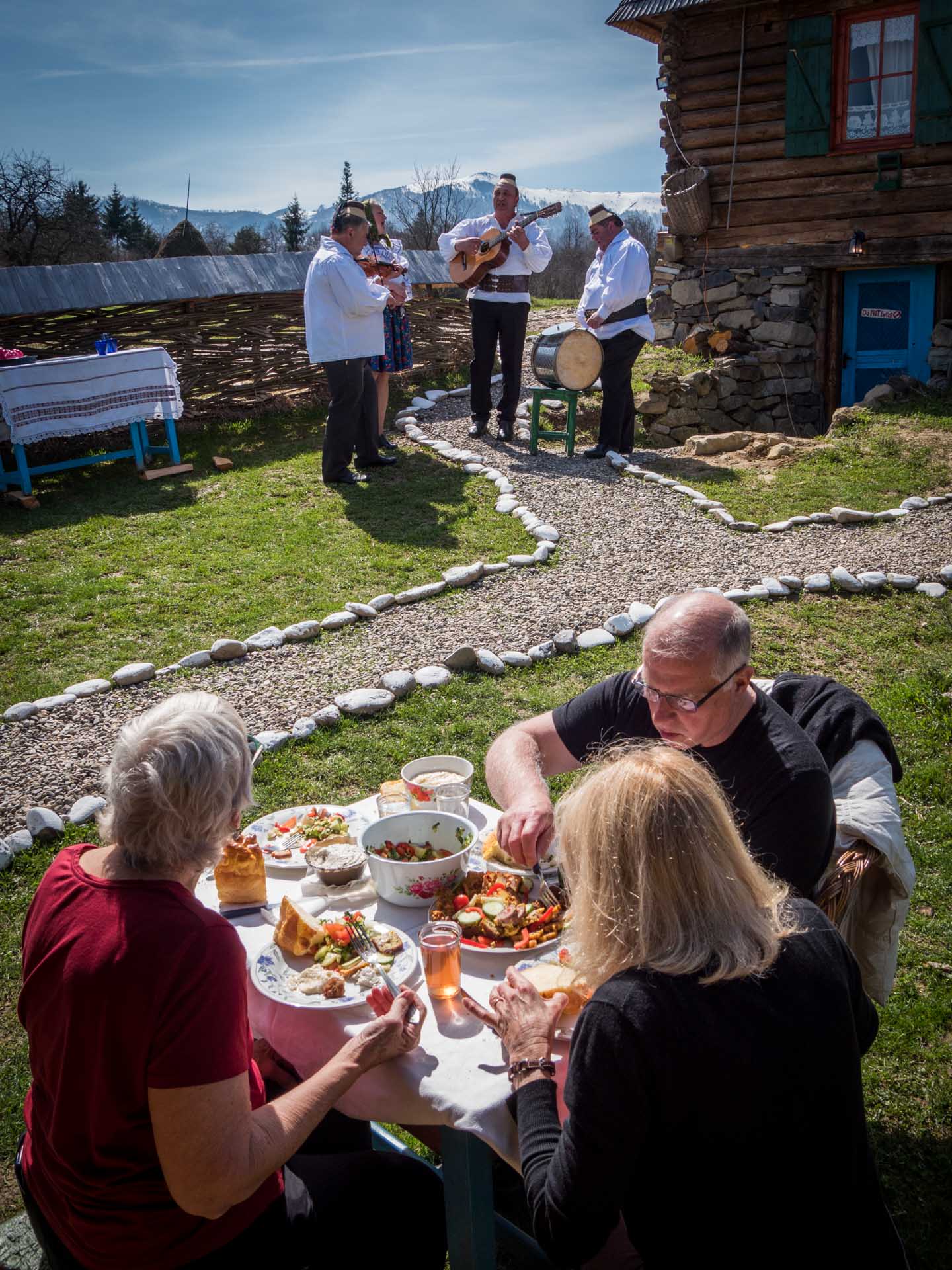 They eat lamb served in various ways – a stew, a steak or drob, which is made from organs.

They also have hardboiled eggs, fresh vegetables and cheese, as well as a delicious dessert consisting of pasca  – made with sweet cheese and raisins – or a relatively modern addition, chocolate eggs. 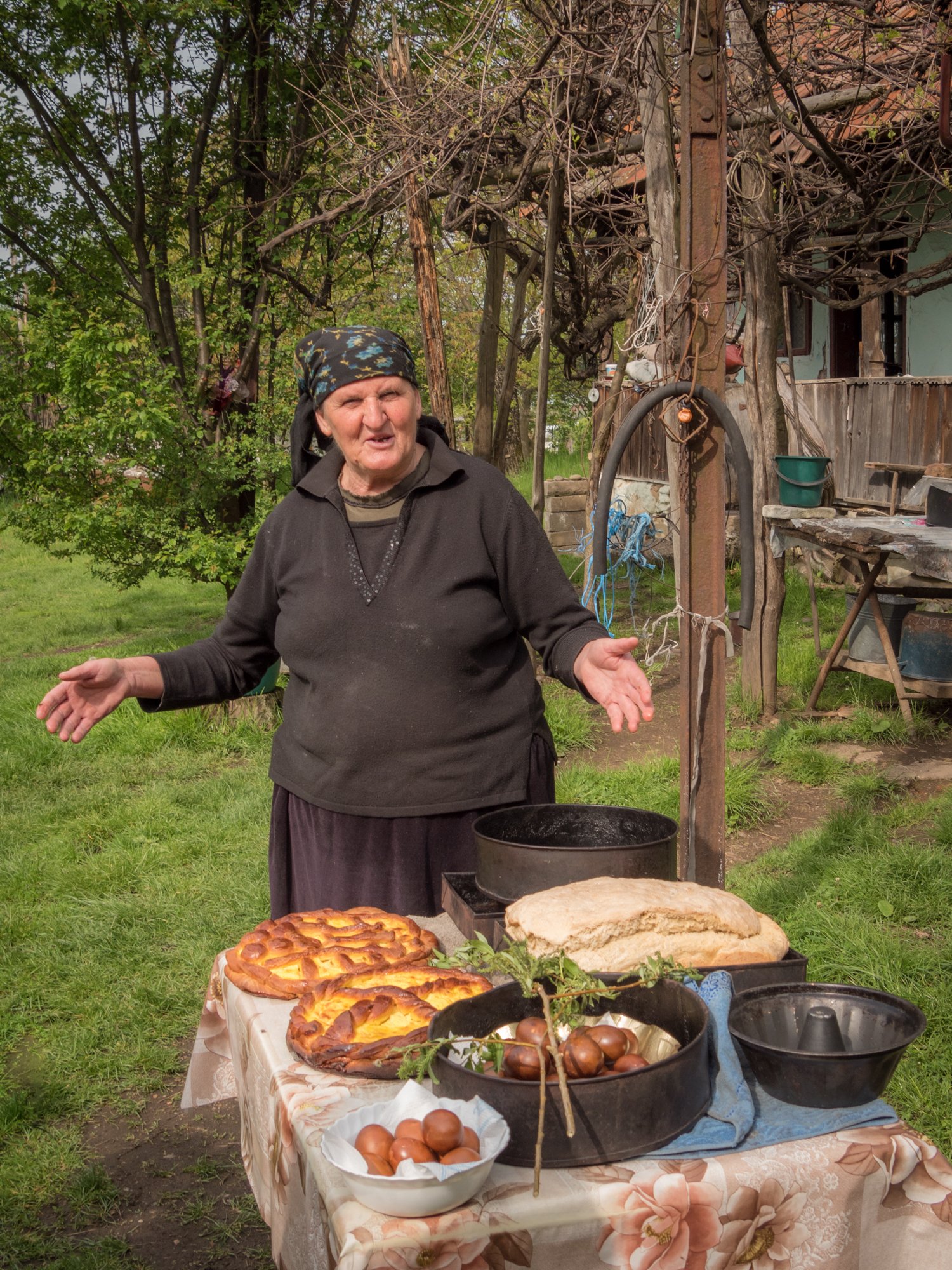 Another important aspect of the Easter celebrations is the knocking of eggs. The oldest person is usually the one who starts.  He says “Christ has risen”, while the second person answers “Indeed He has risen”. 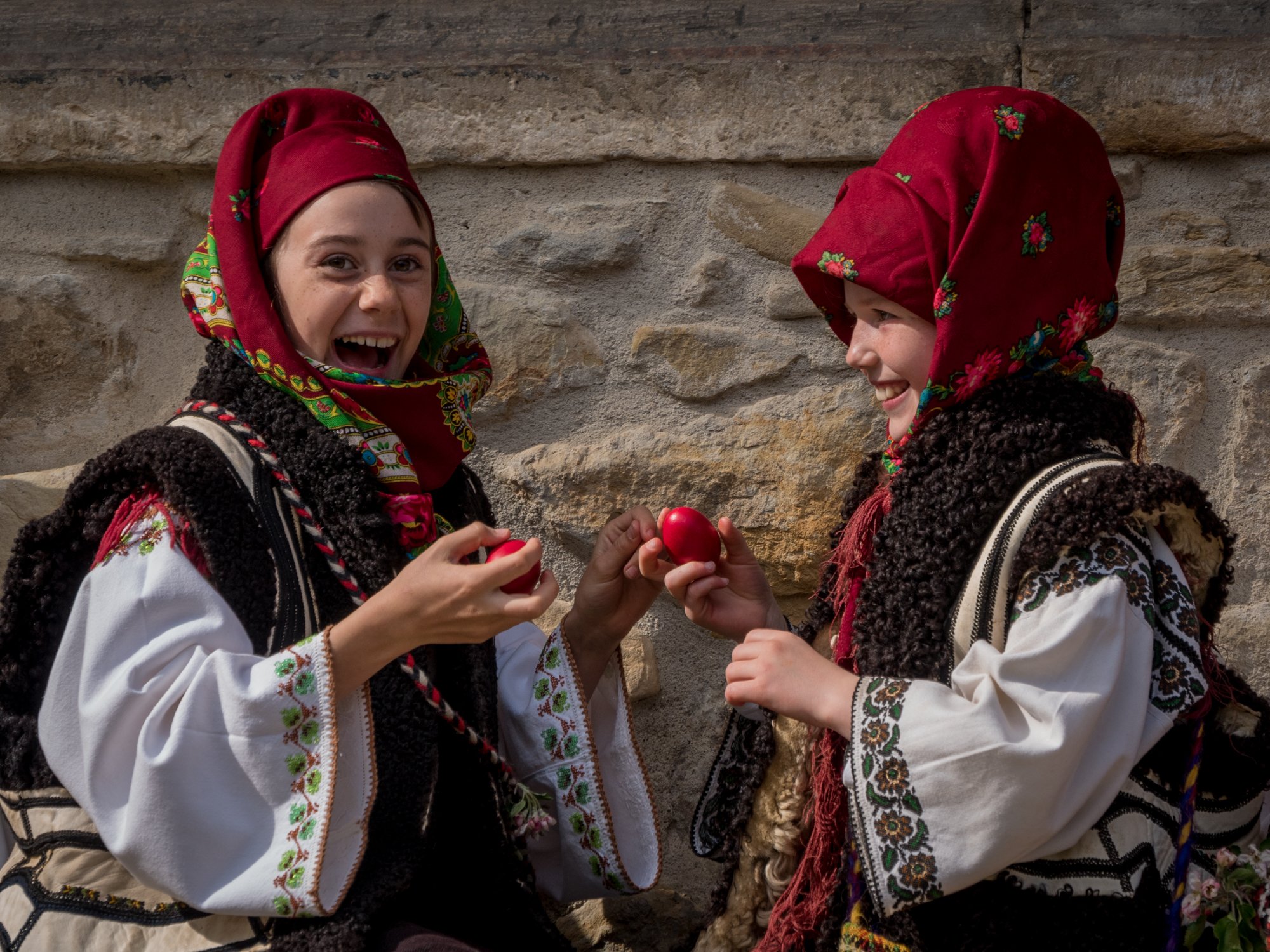 On Monday morning people go once again to church. 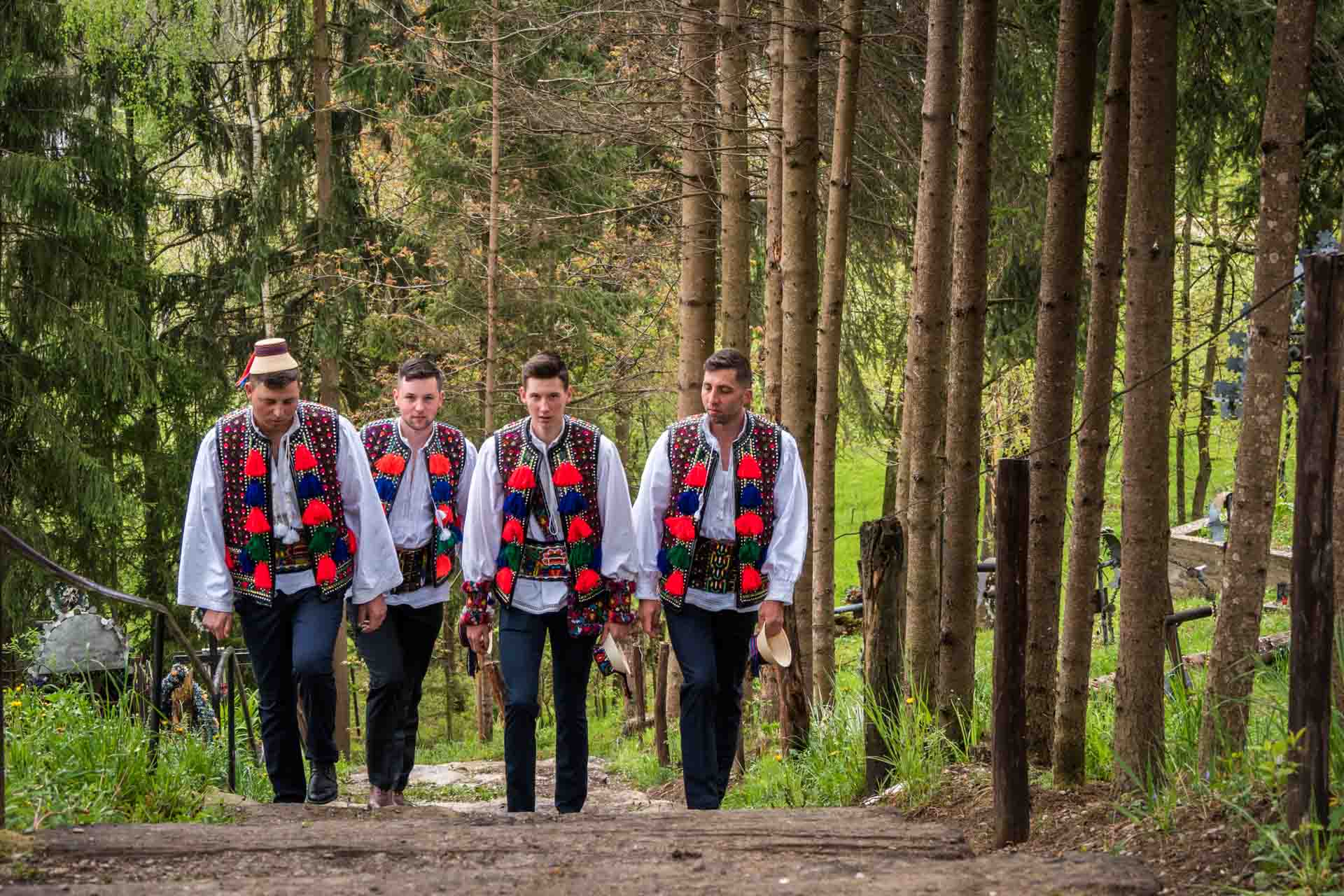 This is another opportunity for taking beautiful pictures of the Easter holidays in Romania, as it’s a time when most people in villages from Maramures and Bucovina regions dress in traditional clothes. 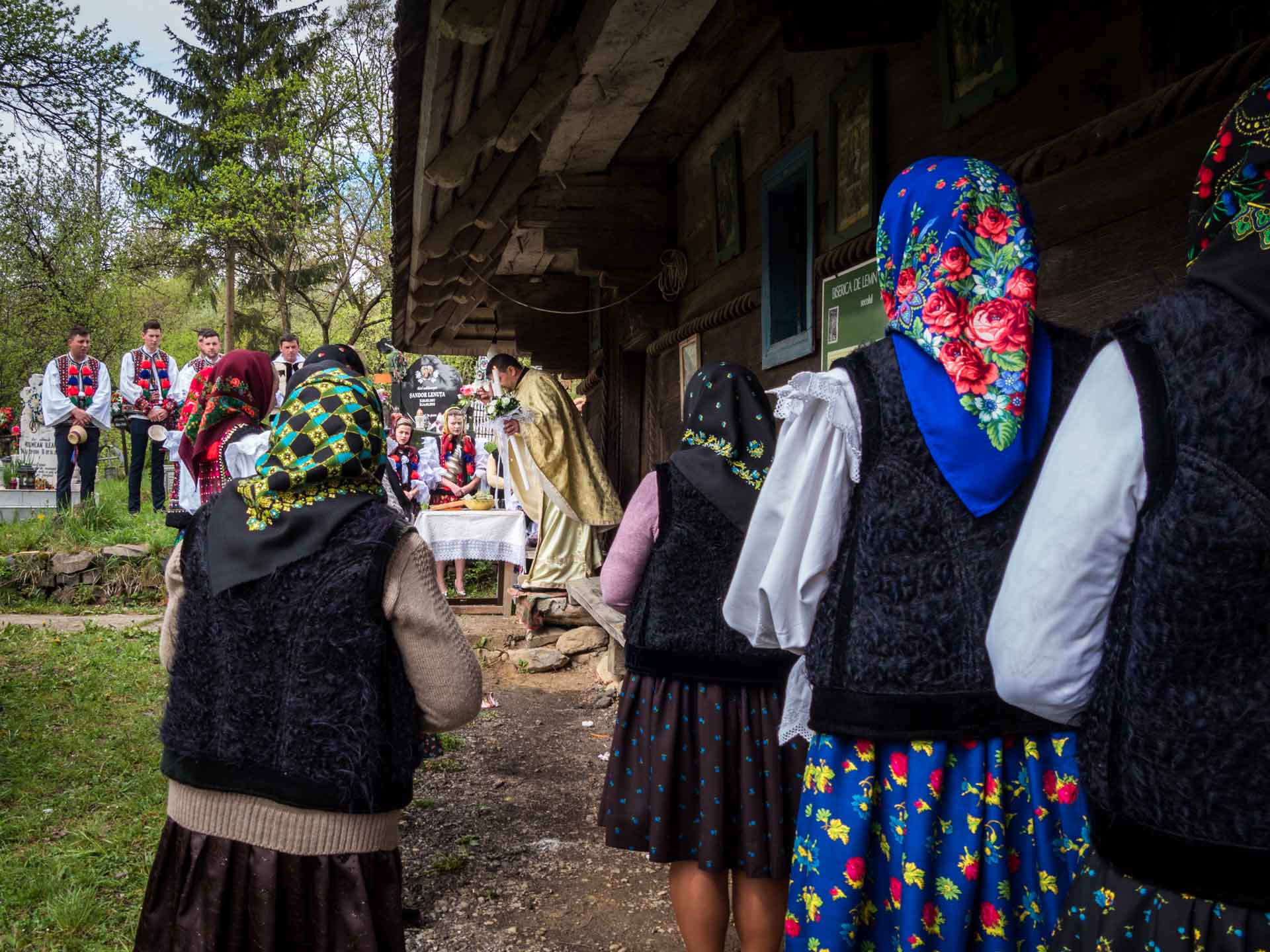 You can get very interesting portrait shots of locals smiling and interacting with each other, while the beautiful architecture of the churches stands out in the background. 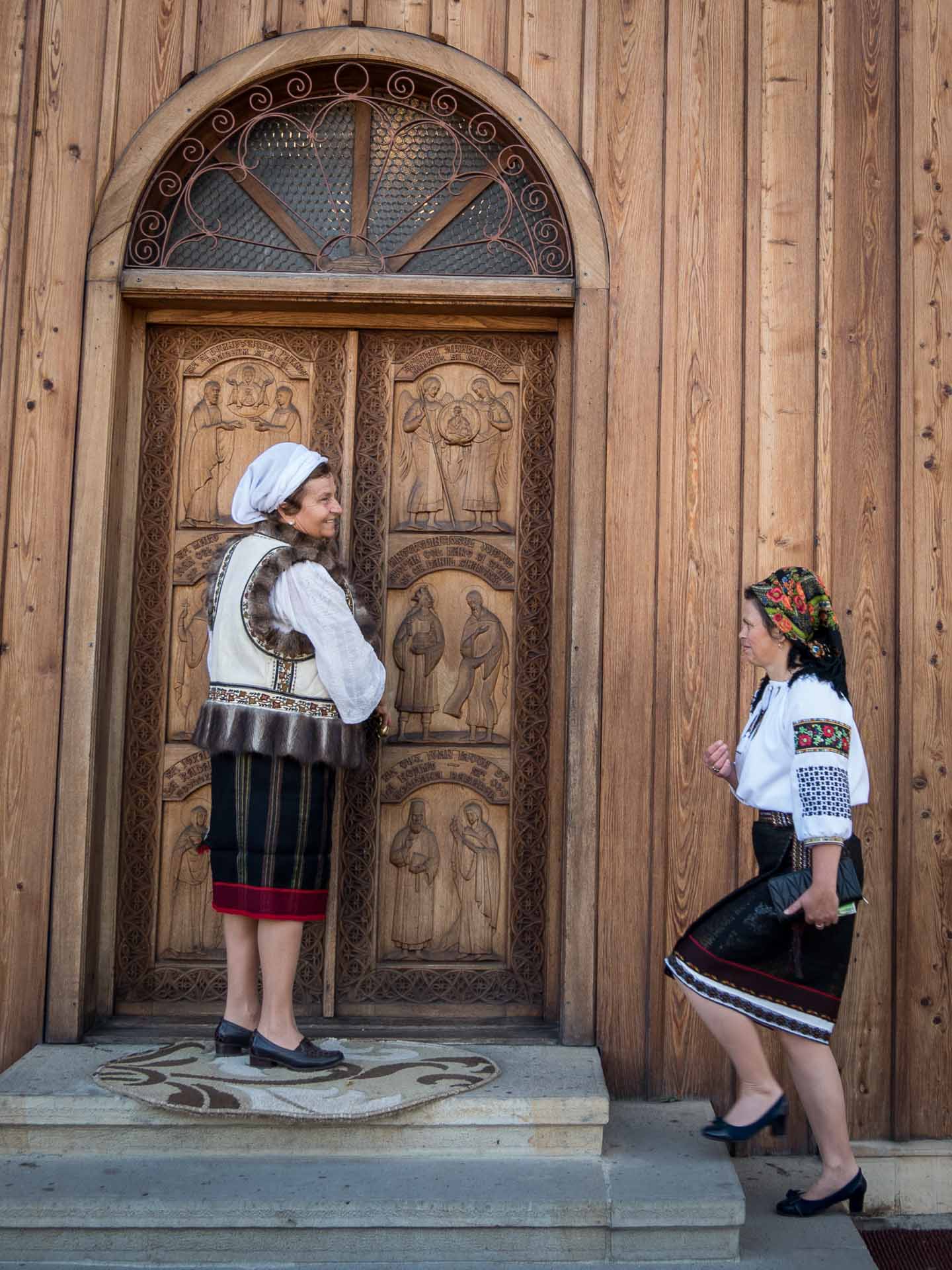 Another Easter tradition of the Catholics and also of the Orthodox is the perfuming of women on the second day of Easter. In the past, young men would douse women in cold water in an act that is associated with fertility and cleansing rites. Nowadays, people engage in a “watered-down” version of the custom by spraying perfume on the girls. 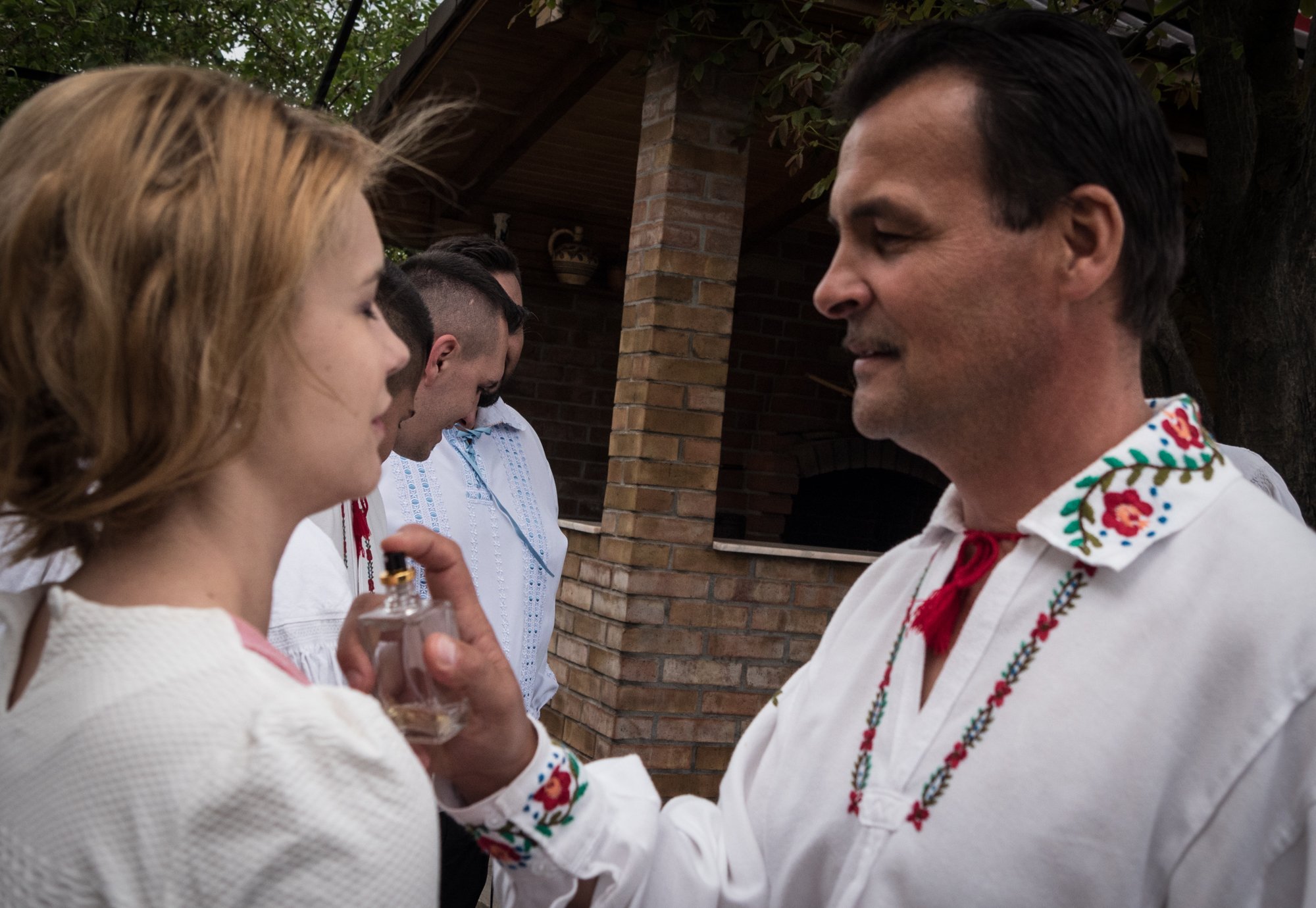 In return, the men are rewarded with small gifts including painted or chocolate eggs, cakes or alcohol.

Some villages throughout Romania celebrate Easter according to their own traditions, one of them being Surdesti in Maramures region. Every year on the second day of the Orthodox Easter locals gather to choose the hardest working villager, known as “Udatoriu”. The custom is meant to symbolize the start of the agrarian season and portrays people’s desire for an abundant season. 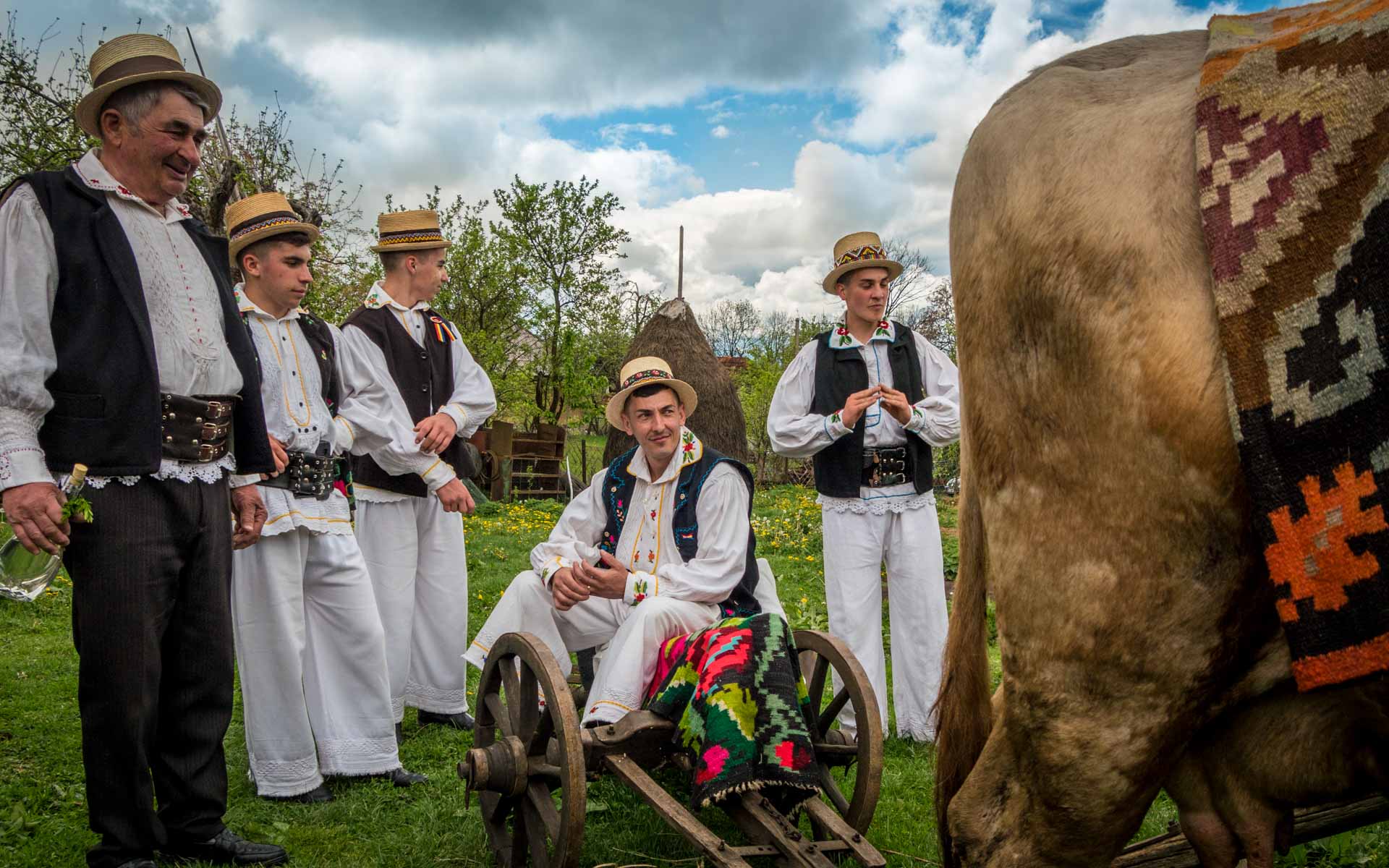 There are plenty of captivating rituals for you to shoot during the day.

“Udatoriu” is carried by a cart drawn by oxen from the center of the village to a nearby river, where those who sinned during the Easter Lent are “punished” and splashed with water. 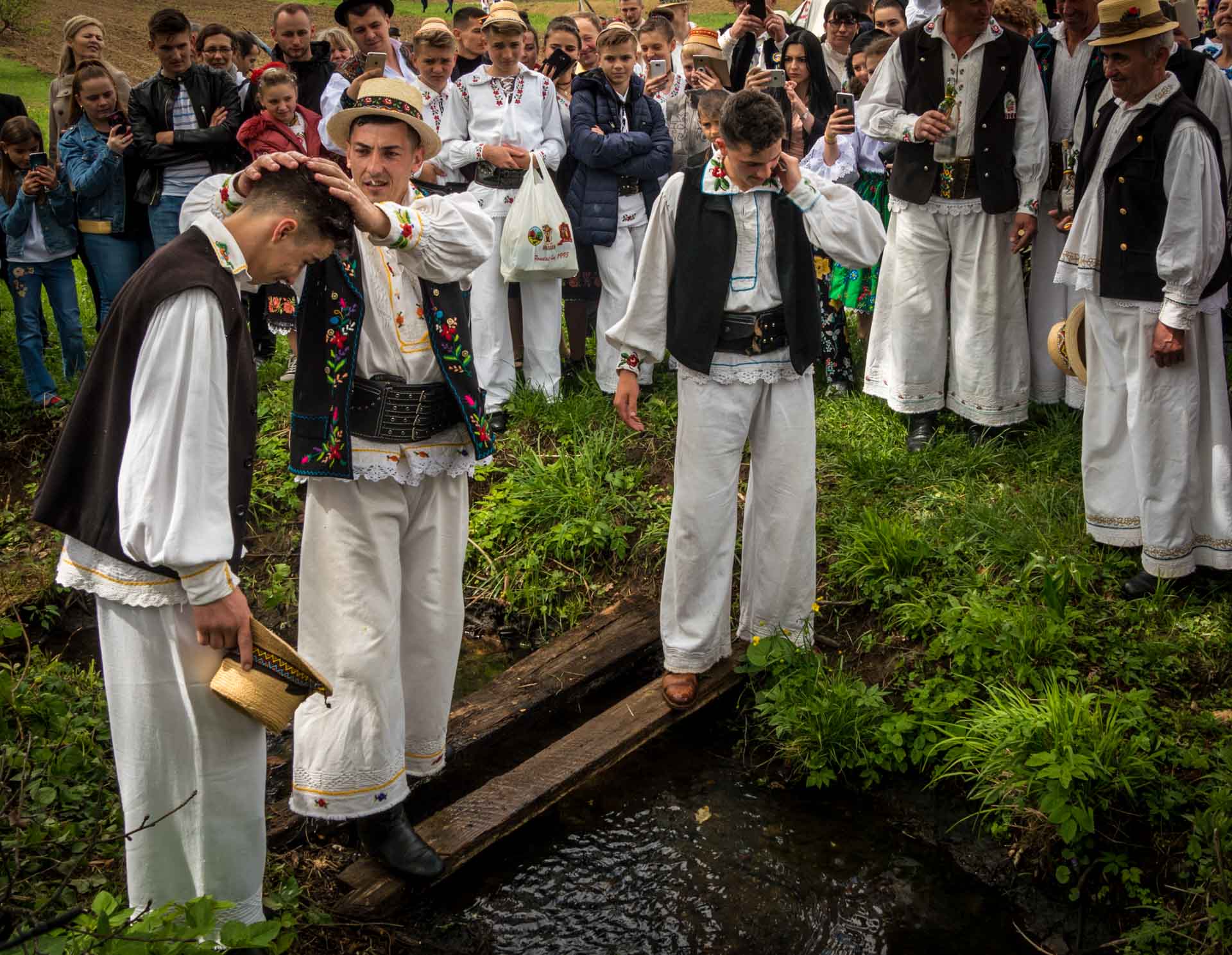 At the end of the day people celebrate with food and dance. 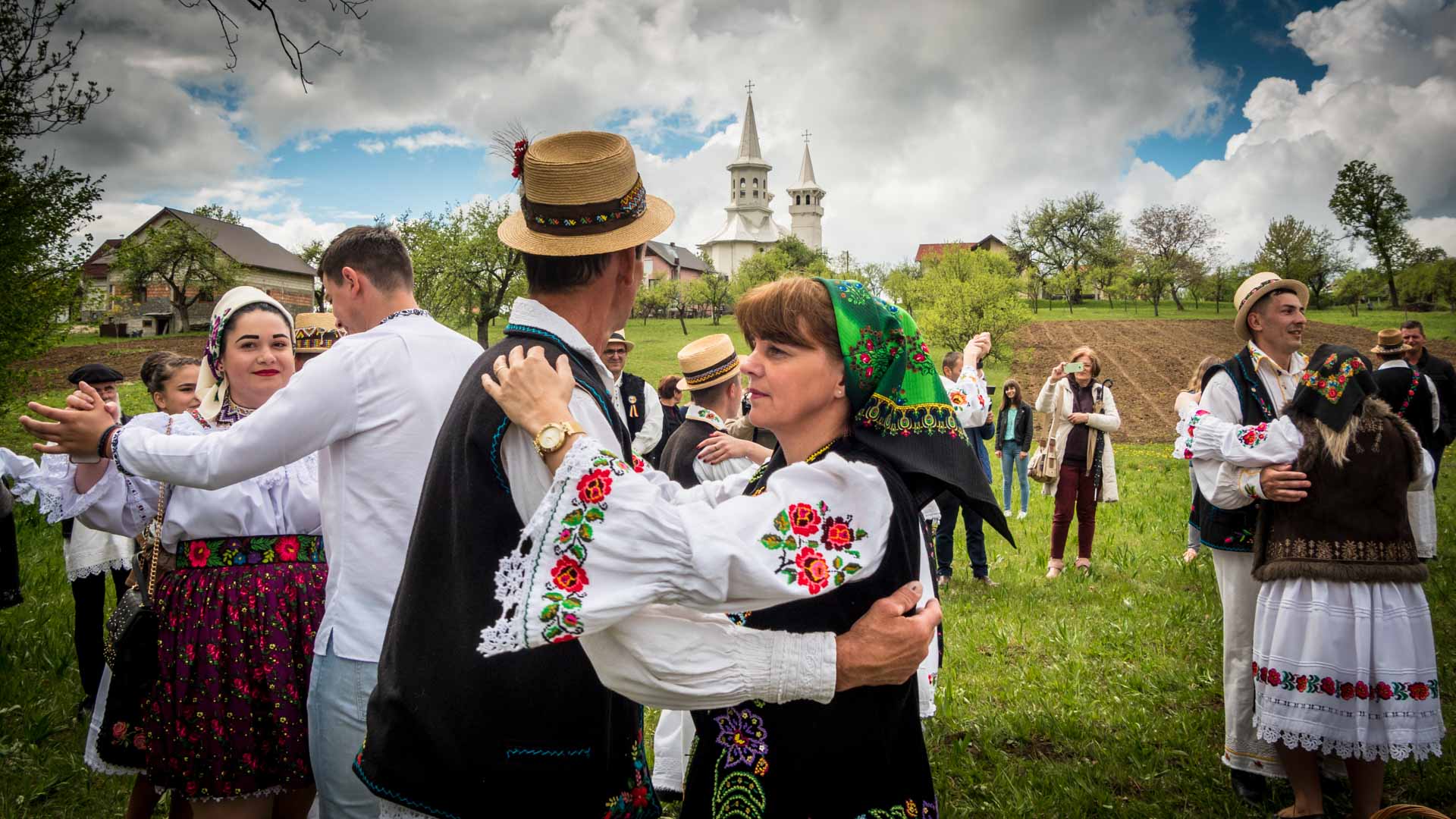 These are some of the pictures that best illustrate the Easter holidays in Romania. If you want to join us next year, check the itinerary of our Easter Photo Tour.

These pictures are licensed under a Creative Commons Attribution-NonCommercial 4.0 International License. You are free to use them for your own creative work, as long as you link back to us, the original source.