Romanian winter festivals to include in your photography bucket list 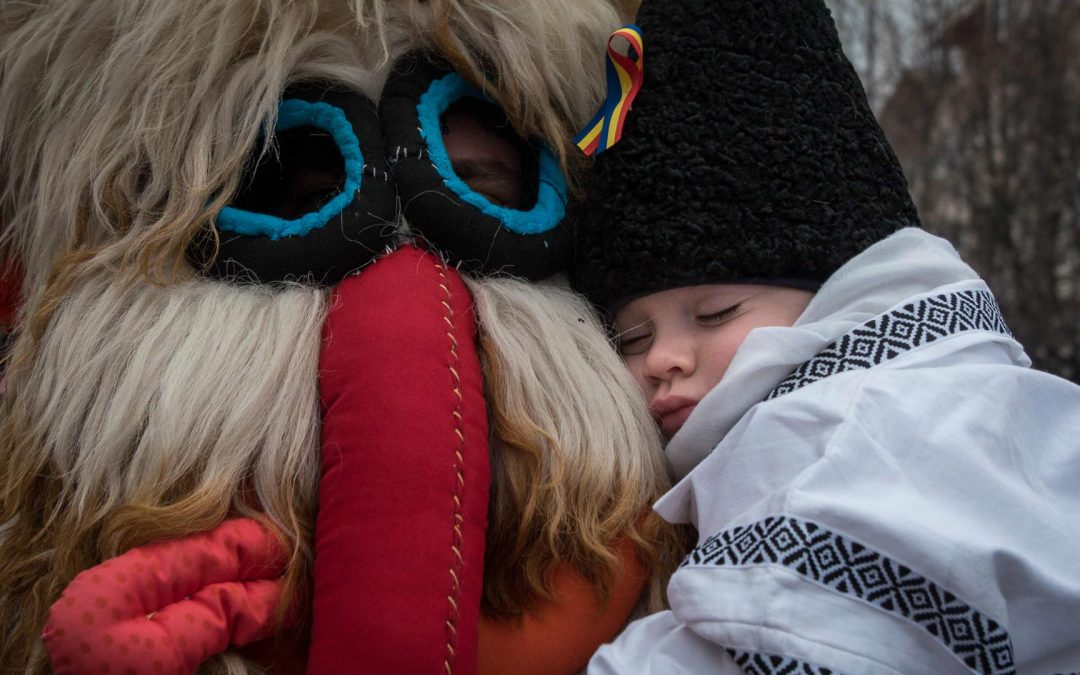 Here are the most fascinating winter festivals in Romania, unaltered by time. They include a variety of traditional habits, with a wide diversity of carols and local costumes, all very interesting to capture on camera.

Festival of winter traditions in Sighet (27th-28th of December)

At the end of December, every year, a synthesis of Romanian winter customs and traditions is performed in Sighet, at the Marmatia Winter Traditions Festival.

On the city streets, carols are being presented by groups dressed up in the specific area costumes, while playing with their masks. Besides representatives of villages from Maramures area, you will also find people bringing to life ancestral customs of other regions of the country (Banat, Moldova, Bucovina, Dobrogea, Oltenia), and even from Ukraine. 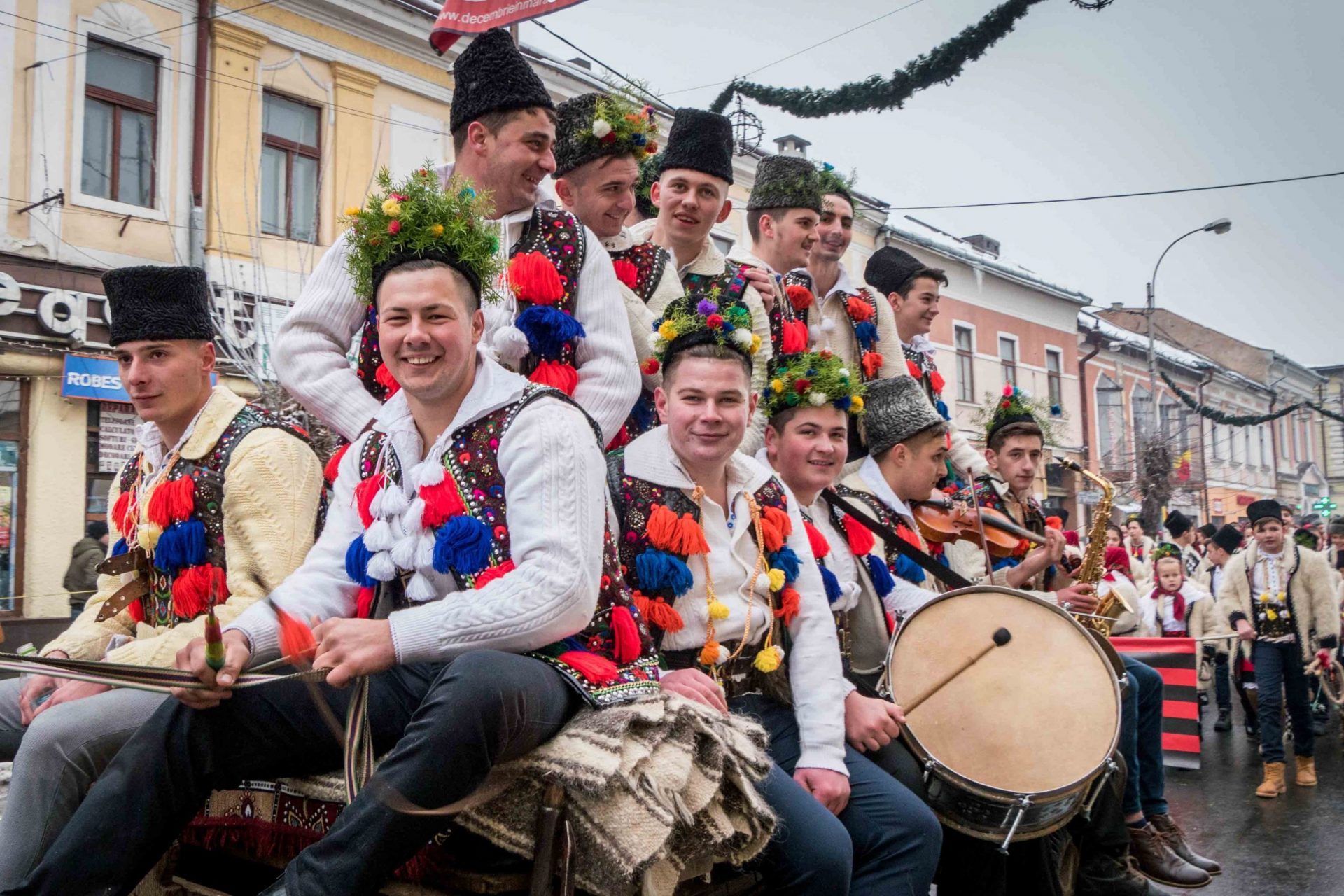 The Romanian winter festival takes place in various places like Campulung Moldovenesc, Suceava, Vatra Dornei, at the end of December. It is one of the most important annual manifestations, celebrating authentic Romanian heritage from the entire Northern Romania, not just Bucovina, and also from Republic of Moldova and Chernivtsi area in Ukraine. You will have the chance to see traditional dances, which include the following: Deer Dance, Bear Dance or the Gypsy Dance, numerous groups of carolers and mask parades. 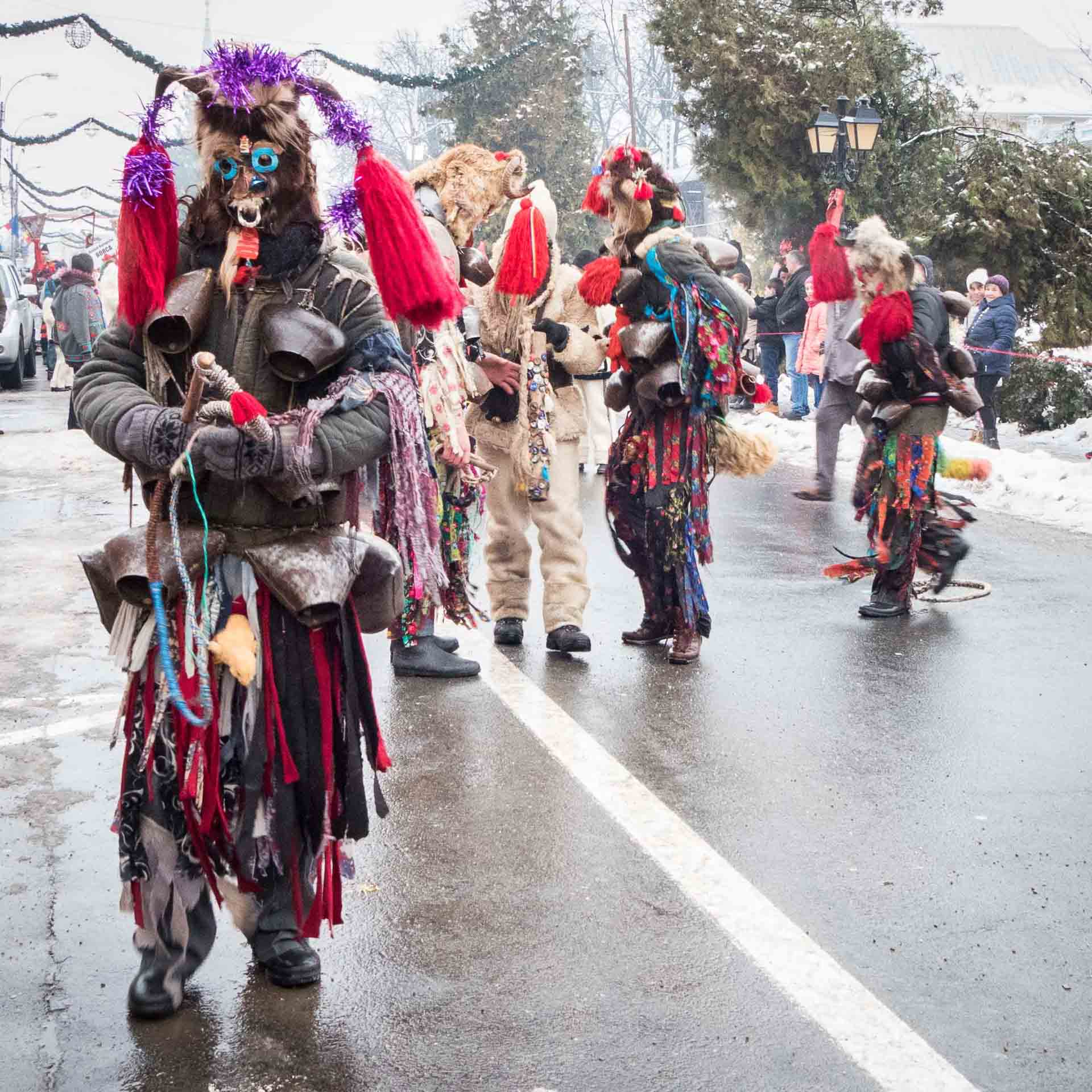 The Youth Meeting in Saliste (28th of December)

Every year after Christmas, following a deeply-rooted tradition of more than 100 years, the people from Marginimea Sibiului proudly display their traditional costumes. This traditional winter festival first took place in 1906 and it consists of a parade of the traditional costumes with the particularities of the place of origin in the Square of the town of Saliste.

The young men and their partners are holding small specific shows, competing in traditional songs and dances. In Romanian it is called “Intalnirea Cetelor de Juni din Marginimea Sibiului”. 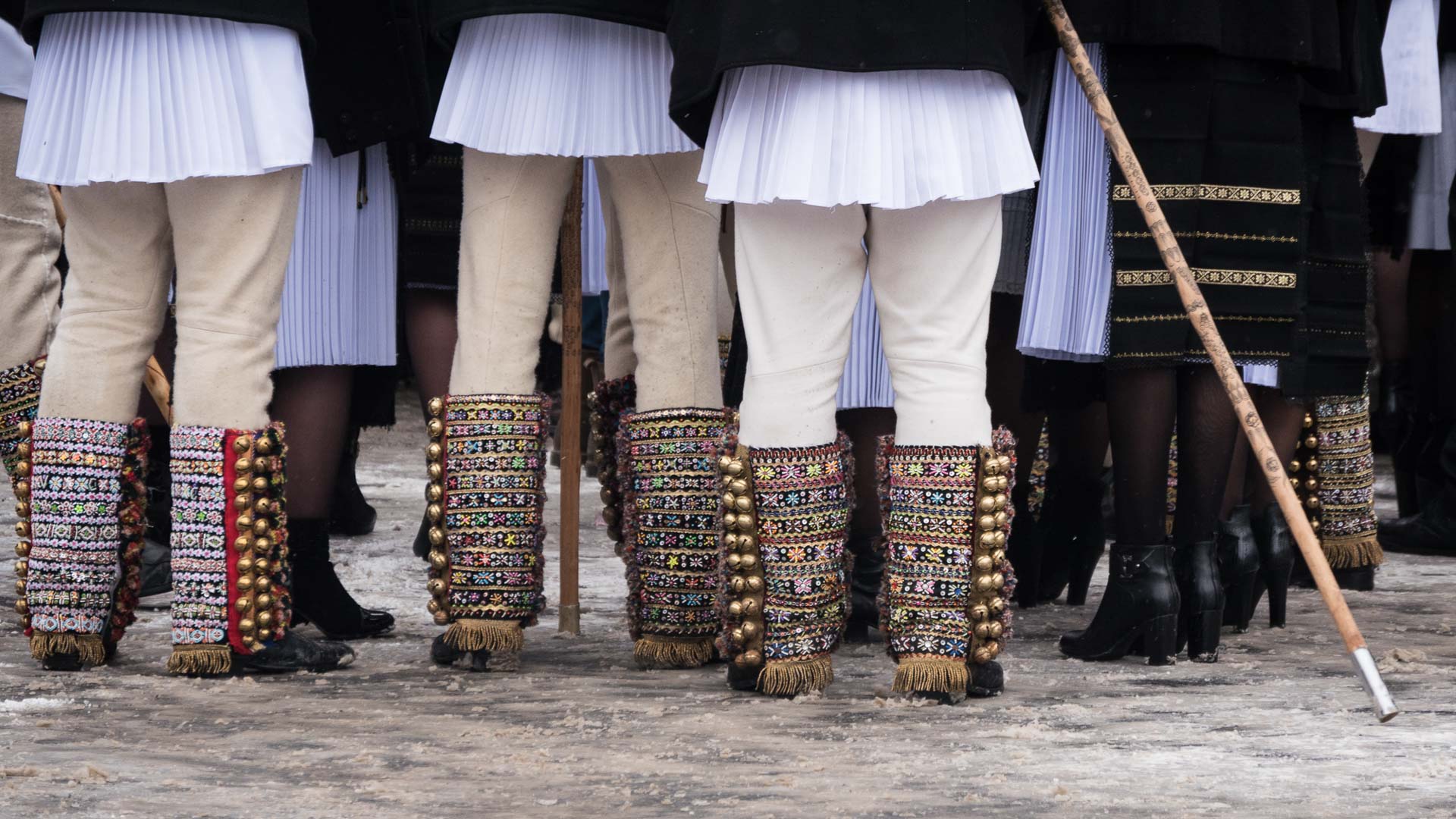 The dances with masks are specific to the Moldova area, dating from pre-Christian Dacian times, when people went from house to house singing, in order to ward off evil and to bring fortune and money.

One of the most famous and spectacular customs shown at Romanian winter festivals is the bear dance, which is performed in many mountain towns of Bacau County, mainly in Comanesti area. In a show of sound, color and movement on the streets of Comanesti, you will be delighted by the frenetic dances performed by groups of men, women and children dressed in real bear skins (weighting even 50 kgs). Besides those, there are a lot of other groups masked or dressed in traditional clothes. 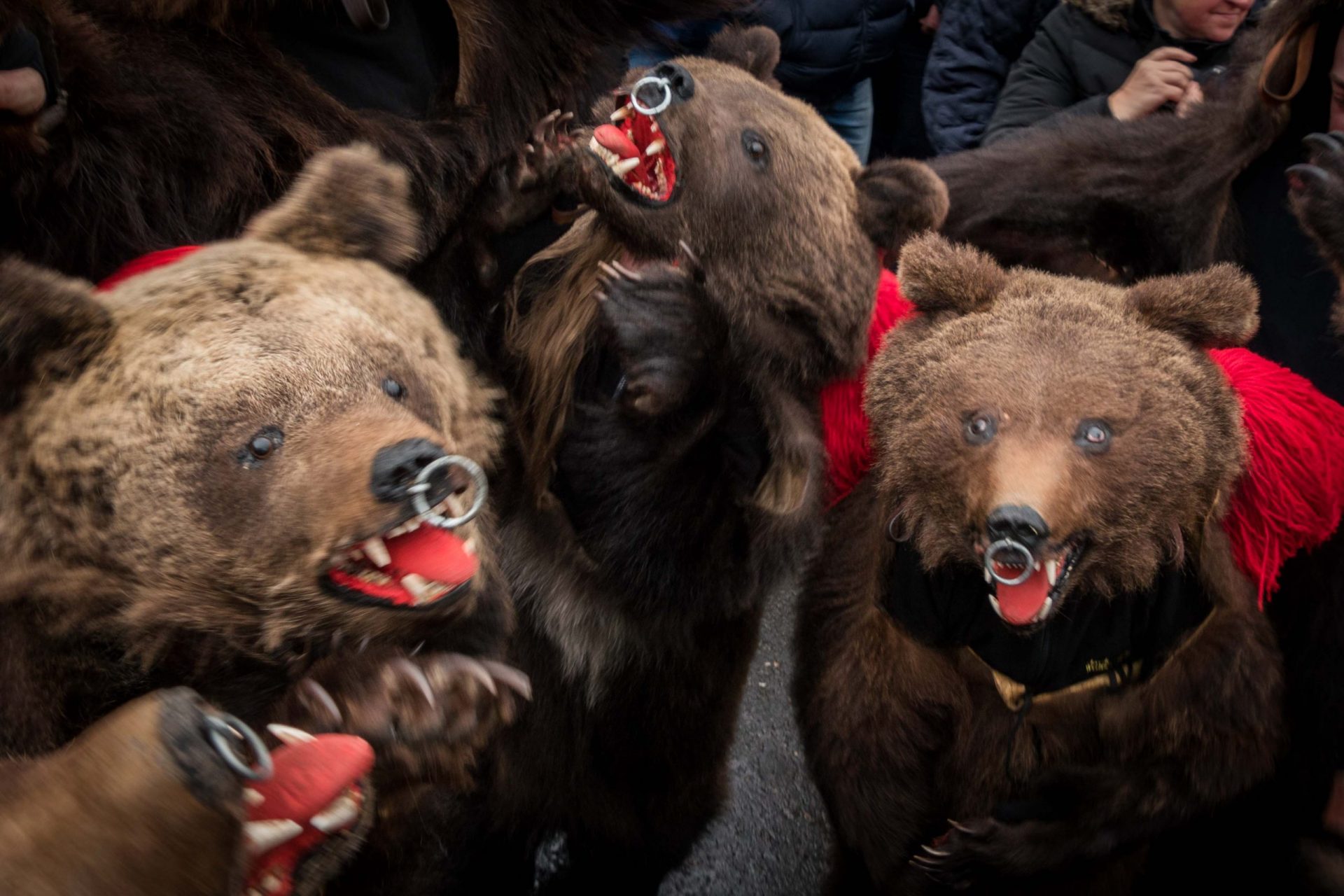 Water splashing of the Johns in Talmacel (7th of January)

Splashing those that are called John with water (”Udatul Ionilor”) is a winter tradition passed down from generation to generation which is still celebrated at the beginning of every year in Talmacel village, on St. John the Baptist’s Day.

After the religious mass, a parade starts towards the river, composed of kids, young women and young men dressed in traditional costumes bearing flags. They are followed by an allegorical chariot pulled by oxen, decorated with fabric and beads and further behind, donkeys carrying an old man and old woman made of straw. Once they arrive at the river, on the background of the traditional sayings recited by the young men, all those bearing the name “Ion” are splashed with water, one by one. The wet Johns are rewarded with traditional cake, Romanian traditional brandy and wine in order to forget about the cold. The celebration then continues on the narrow streets of the village with traditional songs and dances, specific to the area. 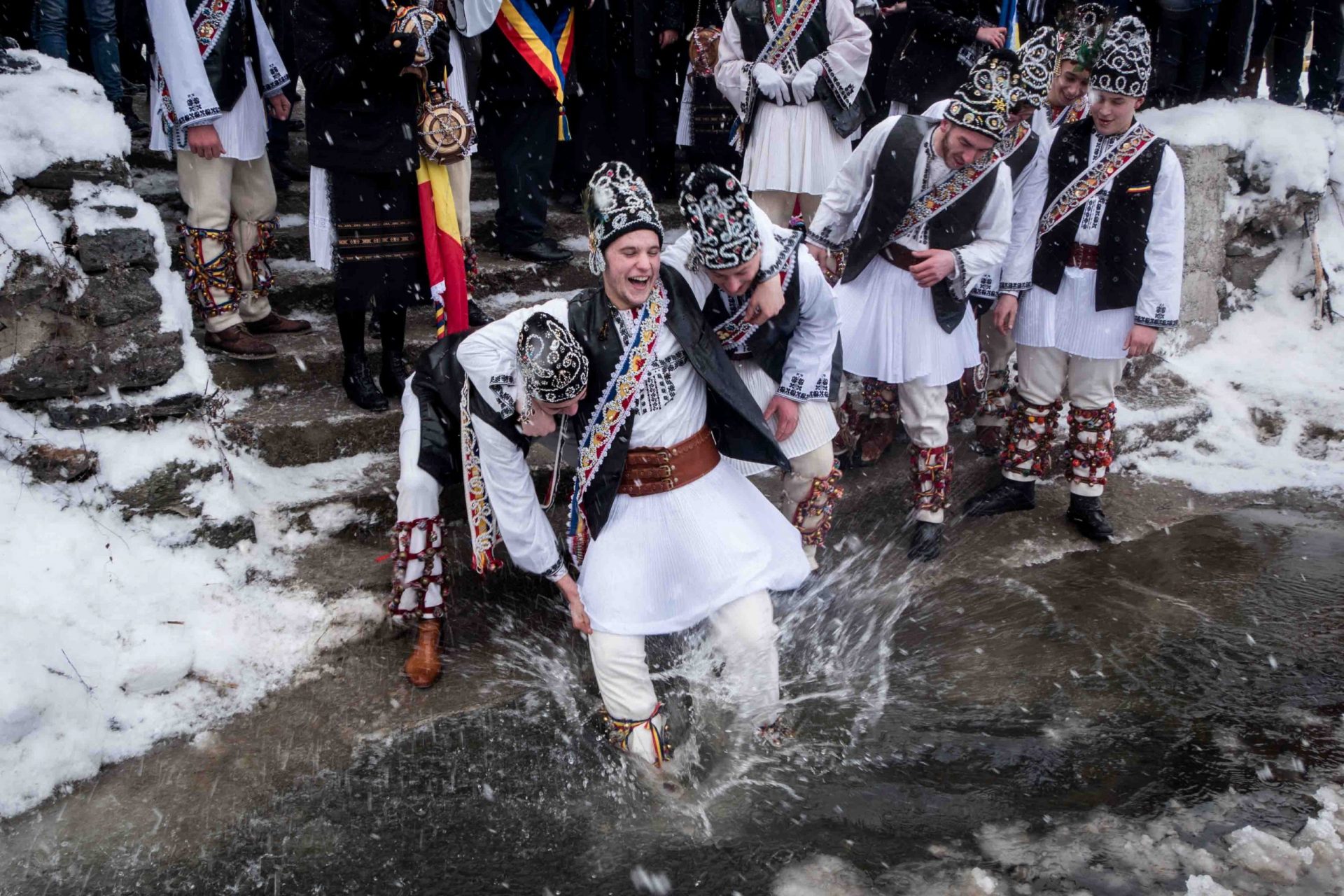 “Fuga Lolelor” is a Transylvanian Saxon custom with its roots in the Middle Ages, which is celebrated in late January in Agnita. The local legends say that one day, as the Ottomans were getting ready to attack the fortress, a brave girl from the village got dressed in a terrifying costume and chased away the invaders.

Nowadays, people see it more as an opportunity for getting to learn about the Transylvanian Saxon customs still alive in Romania.Pagan influences manifested over time and the event is also used to ward off the evil spirits of winter and welcome spring. 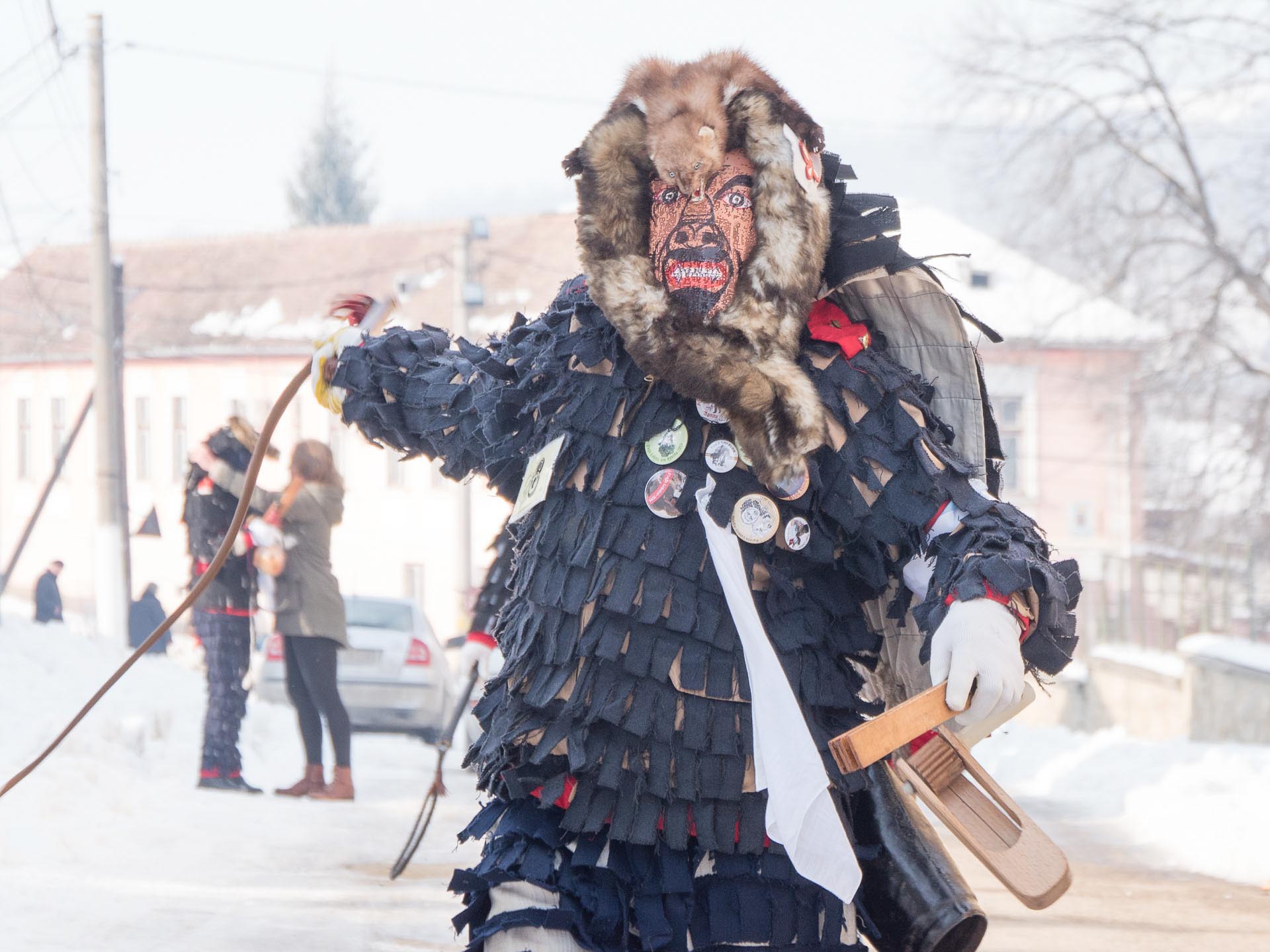 The event starts early morning with a gathering in the city center. Teenagers dressed in traditional Saxon clothes enchant the public with a short dance, after which a parade along the streets of Agnita starts. The parade consists of about 200-300 people dressed in costumes of “Lola”. “Lola” is how the person wearing an intriguing costume, a whip and a terrifying mask is called. The Lolas run in groups on the streets to chase away evil spirits through whips and whistle noises.

The funeral of the Farsang in Rimetea, Alba County (before the start of the fasting period – February/March)

The museum-village of Rimetea, a village with majority of Hungarian population, located in Trascau Mountains, becomes the scene of a real play at the end of February. “Inmormantarea Farsangului” (translated as the burial of Farsang) is a centuries-old custom attended by young people from the village dressed in hilarious costumes and walking on the street in a grotesque parade to bury the winter and the old year, leaving room for the New Year which must be better than the previous one.

After the parade passes through all the streets of the village the young man playing the role of the priest reads a kind of analysis of the troubles and joys of the past year. Then, the coffin in which the winter and the old year are closed is broken with sticks, as a way to ward off evil spirits, to bury the old year, leaving freedom for the rebirth of the world in the spring.

Farsang is the equivalent of the carnival (like Rio or Venice) and it is of Catholic origins. In Romania it is celebrated in other areas as well, for example in Bania there is an event called “Lunea Cornilor”. 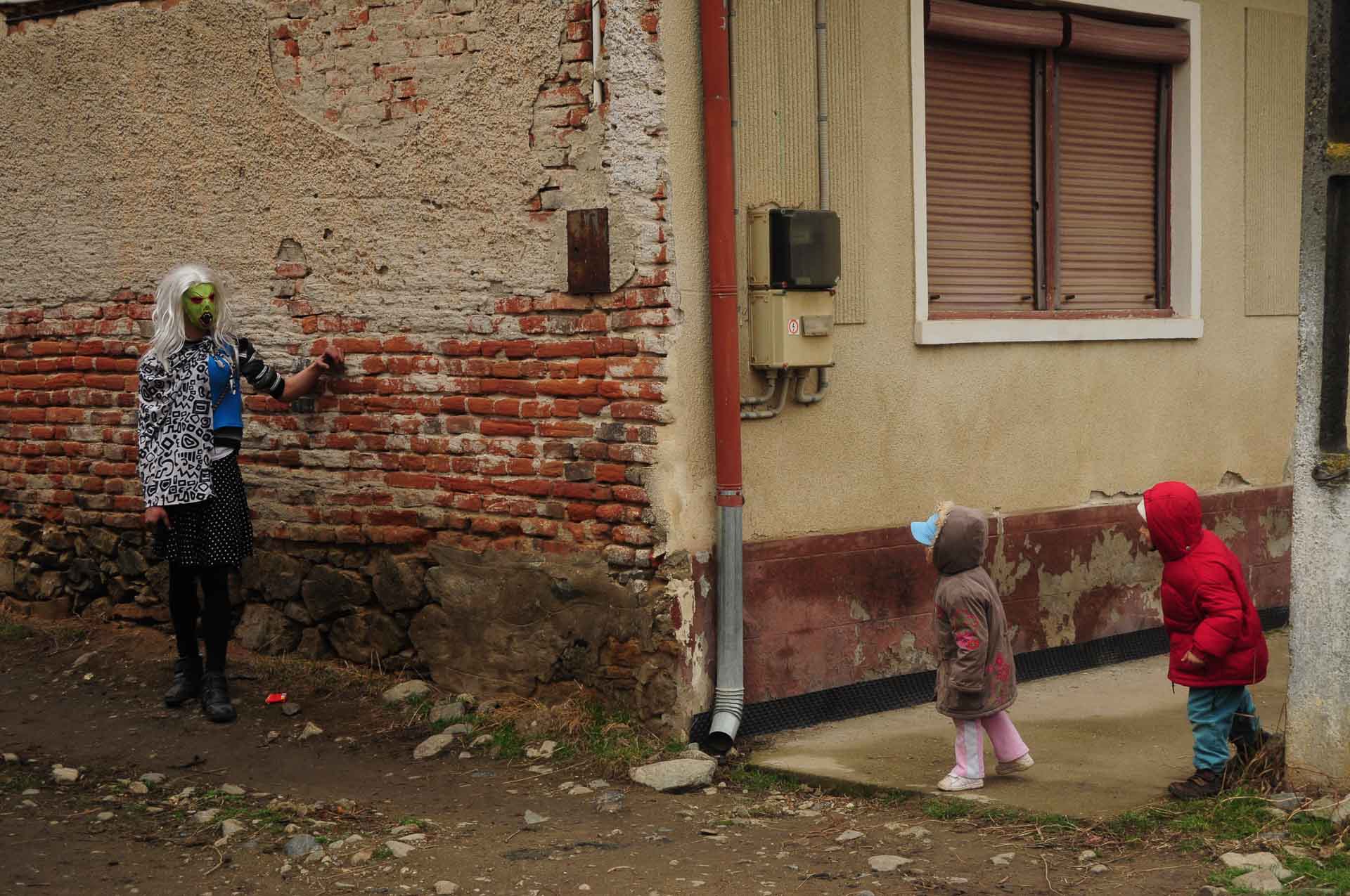 Besides these Romanian traditional winter festivals which are centuries-old, you can also be delighted by Christmas markets in medieval towns such as Sibiu, Brasov, Cluj-Napoca and Timisoara. Join us next winter for a wonderful experience! 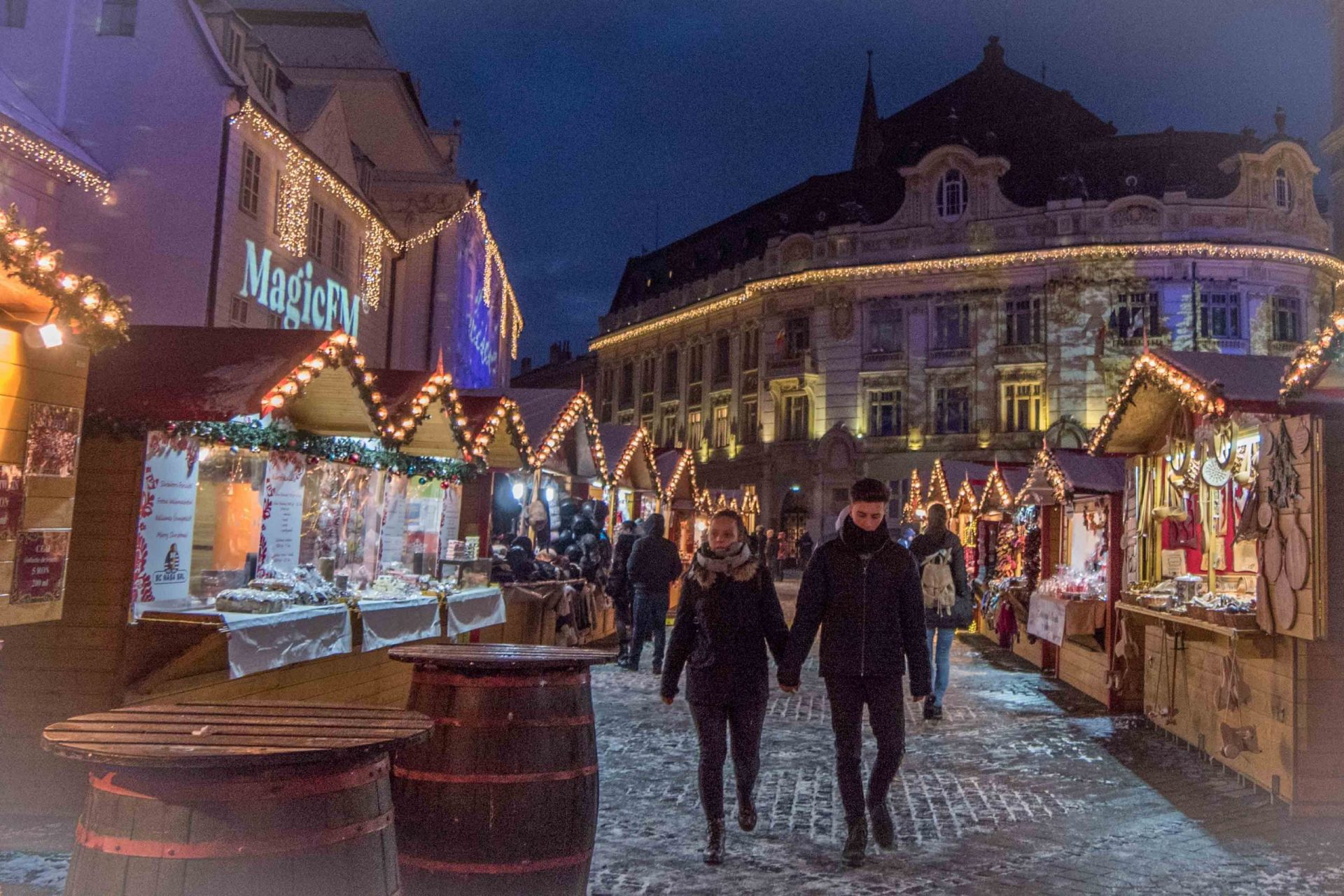 Most of these pictures were taken during our Christmas Photo Tour in Romania and our New Year Photo Tour.

These pictures are copyrighted. If you are interested in using them, please visit our Gallery page for more information.